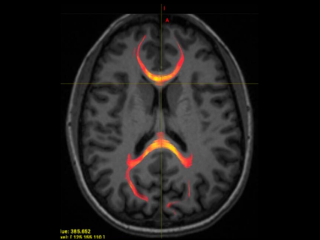 An MRI image from a patient with mild traumatic brain that highlights the nerve fibers of the corpus callosum, an area that helps the two halves of the brain “talk” to each other. These fibers may be damaged after a concussion.

A big bump to the head can literally send the brain bouncing around inside the skull, and all that jostling may injure the brain in a way that disrupts the flow of information from one half of the organ to the other, according to a new study.

The study focused on a dense bundle of nerve fibers known as the corpus callosum, which normally serve as a landine for the left and right hemispheres of the brain to talk to each other. But these crisscrossing wires can sustain serious damage if the brain suddenly twists or jounces against the skull, resulting in mild traumatic brain injury — otherwise known as a concussion.

Recent research suggests that concussive blows shake the corpus callosum more violently than any other structure in the brain, but scientists don’t know exactly how the resulting injuries might affect brain function. Now, new research has pinpointed how concussion-induced injury knocks brain activity off its normal course.

“In the healthy brain, there is a relationship between the microstructure of the corpus callosum … and how quickly we process information. This relationship is altered after concussion,” co-author Dr. Melanie Wegener, a resident physician at New York University Langone Health, told Live Science in an email. The findings, presented today (Dec. 3) at the annual meeting of the Radiological Society of North America in Chicago, could help clinicians gauge how much damage a patient has incurred after concussion and guide their treatment, Wegener added.

To see how brain function changes after concussion, Wegener and her colleagues used brain scans to peer through the skulls of 36 patients who had suffered a mild traumatic brain injury less than four weeks prior, as well as 27 additional participants without traumatic brain injury. Using a technique called “diffusion MRI,” the researchers investigated how water molecules move in and around the nerve fibers in the participants’ heads.

Unlike free-floating water molecules in a glass, which venture through their container at random, water in the brain tends to travel more rapidly along bundles of nerve fibers oriented in a similar direction, according to the textbook Guide to Research Techniques in Neuroscience (Academic Press, 2010). Diffusion MRI allows scientists to map these cerebral waterways in pristine detail, and from that data, infer the position, size and density of individual nerve fibers that weave and wind through the brain.

After Wegener and her coauthors took snapshots of their participants’ brains, they challenged both the concussion and control groups to a tricky test. The individuals first focused their attention on a screen with an “X” in the center; then, a three-letter word would pop up to either the left or right of the X. Participants would say the word out loud as quickly as possible before moving on to the next round.

In Wegener’s study, both healthy and previously concussed patients performed the same on the test; both read right-side words aloud with no trouble, but experienced a brief delay when presented left-side words. But their MRI scans told an interesting story. In the control group, participants’ performance on the test correlated with the shape and structure of a thick portion of the corpus callosum known as the splenium. Located near the back of the brain, the splenium bridges the right visual cortex and left language center, and serves as a convenient route for words to travel across the brain.

However, in patients who had experienced a concussion, there was no apparent link between the splenium and test performance. Instead, performance seemed tied to a structure on the opposite end of the corpus callosum, called the genu. Concussion likely altered the original structure of the corpus callosum, forcing words to find alternate routes across the brain, the authors concluded.

“It is not entirely clear how the brain responds after injury,” but in general, the results suggest that healthy brain structures may help cover for damaged ones after concussion, Wegener said.

However, there could be another explanation, according to one expert. Harvey Levin, a neuropsychologist and professor of physical medicine and rehabilitation at the Baylor College of Medicine in Houston, who was not involved in the study, said that it’s unlikely that one portion of the corpus callosum would take over the job of another. “There’s no way that the front of the corpus callosum can accomplish what the back can do,” he said. Rather, it may be that the splenium was only partially damaged, and retained some function. If that’s the case, the splenium could continue to transmit information from one side of the brain to the other, he said.

In terms of test performance, patients with past concussions kept up with the control group in this particular study, but Wegener said that the structural changes in the corpus callosum may affect cognitive function in other ways. “We’re curious how these findings relate to specific symptoms, such as cognitive slowing, difficulty with attention and concentration,” she said.

However, as of now, Levin said no conclusions can be drawn from the new study about how the noted structural damage relates to real-world brain function. “Extrapolating from [these preliminary results] to how a person functions in daily life is a very long leap,” he said. Firstly, the definition of “mild traumatic brain injury” varies depending on the given study, so it’s unclear whether the new results would apply to a different sample of patients with concussions, he said. Furthermore, the NYU study sampled a small group of people. Overall, we  should be “quite cautious” in interpreting the results, Levin said.

If future studies confirm the results, clinicians could track structural changes in the corpus callosum and other nerve fibers to diagnose patients with concussions and track their recovery through time, Wegener said. In the immediate future, she and her co-authors aim to combine brain imaging with machine learning — a type of artificial intelligence software — to more accurately detect brain injury in patients with concussion and guide their course of treatment.

Editor’s note: This article was updated on Dec. 3 to include quotes from Harvey Levin.

Confusion and chaos surround coronavirus testing in the US