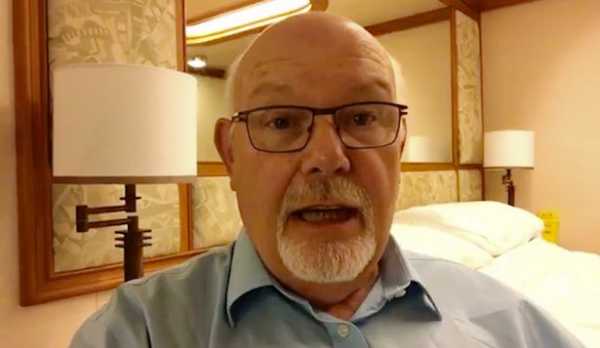 A British man on his honeymoon is among the 61 passengers on Carnival’s Diamond Princess to have tested positive for coronavirus, according to a Brit pensioner who is stranded on board

A British man on his honeymoon has contracted coronavirus on a cruise liner on lockdown off the coast of Japan, a fellow passenger has claimed.

Brit David Abel, a holidaymaker on the Diamond Princess cruise which is anchored off Yokohama port near Japan, has said one of the 41 new cases among passengers is a friend of his.

The 74-year-old, who is holidaying with his wife Sally said the man will now be separated from his new wife.

News that 41 more people – 21 Japanese, eight Americans, five Australians, five Canadians, the Brit and one from Argentina – on the cruise liner tested positive for coronavirus brings the total cases confirmed on the ship to 61.

The British patient follows a man being diagnosed with coronavirus in Brighton yesterday.

One of the new cases is a UK national, according to Reuters TV journalist Mayu Yoshida based in Japan.

She said one of the 61 are in a critical condition.

Brit David Abel said one of his fellow Britons has tested positive for the coronavirus on board the ship anchored off Japan
(Image: Facebook)

On a Facebook video posted today, Mr Abel said: "One of the disconcerting things, one of the people we have been dining with, during the duration of the cruise for our evening meals – because we are a table of six and all Brits – one of them has been proved positive for the virus and he will be most certainly leaving the ship today.

"Real, real shame. Now, I have no idea how he must be feeling.

"I don't want to mention names because that wouldn't be right at this present stage, but they are on their honeymoon. He will be going off into quarantine in a medical facility and she has to stay on board the ship because she is not displaying symptoms.

"That's going to be really tough for him," he added.

Mirror Online has contacted the Foreign Office for more information.

The jump in infected passengers on the cruise liner comes as the vessel was under a two-week quarantine with about 3,700 people in it. 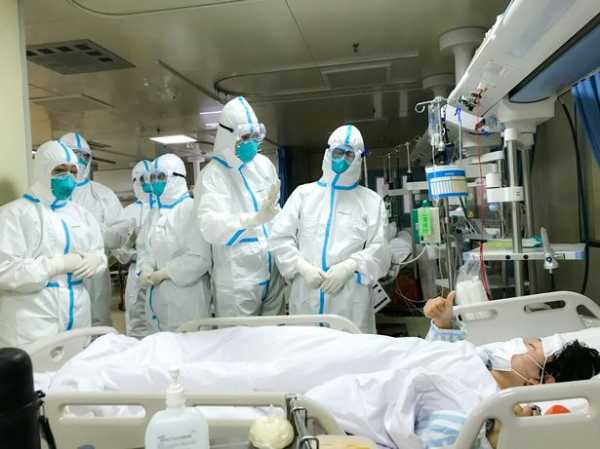 Doctors treating a coronavirus patient, with the death toll now up to 636
(Image: CHINE NOUVELLE/SIPA/REX)

A Japanese woman earlier raised a flag over her cabin's balcony with a message saying "shortage of medicine".

The new cases were out of the 171 remaining test results, Health Minister Katsunobu Kato told reporters.

This comes as 3,143 new infections were confirmed across mainland China on Thursday, a third consecutive record broken for new cases, bringing the total to 31,161, the National Health Commission said on Friday.

The death toll from the outbreak in the Asian country has reached 636 as of the end of Thursday, up by 73 from the previous day. 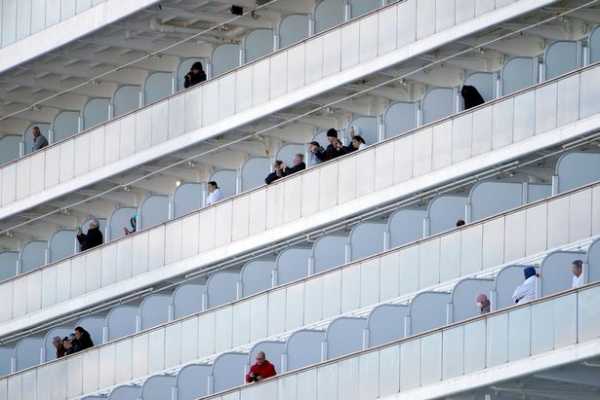 A total of 61 passengers aboard the Diamond Princess cruise have been confirmed has having coronavirus
(Image: FRANCK ROBICHON/EPA-EFE/REX) 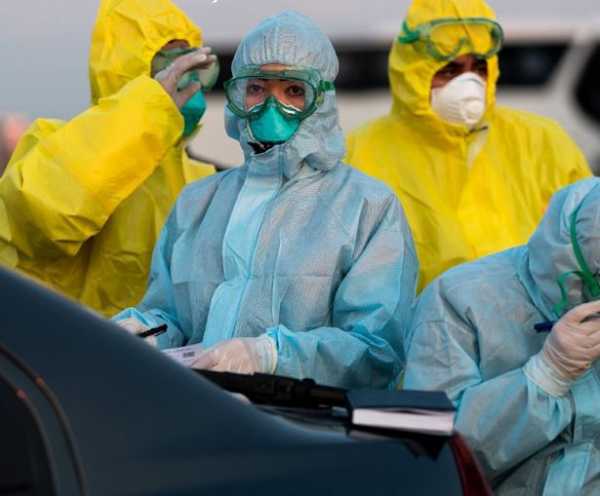 The Diamond Princess is one of two cruise ships in Asian waters on lockdown
(Image: Anadolu Agency via Getty Images)

The new cases take the total number of coronavirus infections in Japan to more than 80.

The rise in the number of infections aboard Carnival's Diamond Princess shifts the mood for thousands of passengers stuck inside their cabins, with the vessel docked off Yokohama port – but they were allowed to breathe air on open decks on Thursday.

Among the ship's passengers are a reported 78 Britons with pictures having shown many gathering on the ship's galleries on Wednesday to wave at onlookers and press, some in face masks.

An 80-year-old Hong Kong man tested positive for the virus after disembarking the ship late last month, and subsequently an initial 10 people tested positive and were taken to hospital to be quarantined. 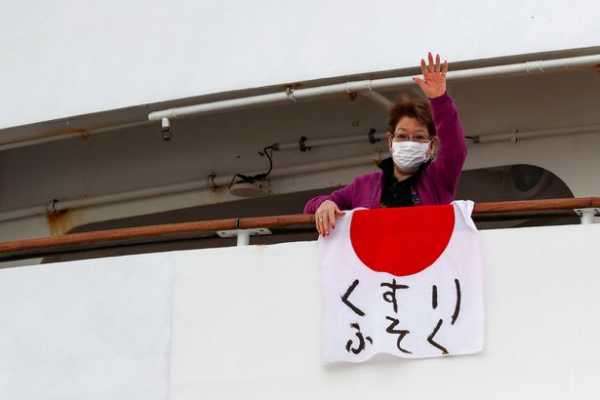 A woman hung a Japanese flag that read "shortage of medicine" on the cruise ship Diamond Princess
(Image: REUTERS)

Brit passenger Mr Abel claimed earlier this week passengers who he said were not getting food or water, were being left completely in the dark about the rising infection rate.

In his latest video, he said the captain had announced passengers need to "monitor our temperatures" though have "not been given any instrument" to do so.

"I'm not sure how we can do that but we have been asked to monitor our temperatures on a regular basis and if it's increased above normal we are to contact the medical services on board ship and every passenger has been given three priority numbers to call." 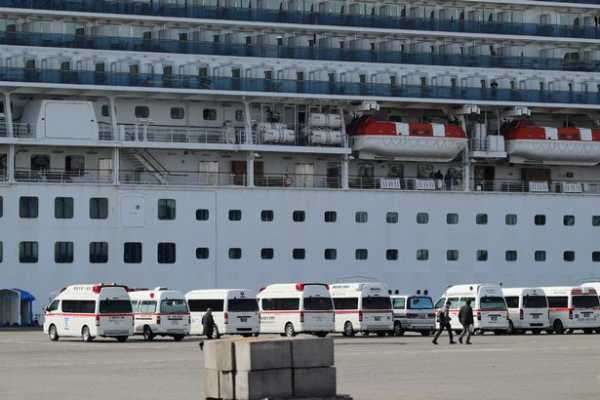 Ambulances lined up in front of the cruise liner as those infected are being taken to medical facilities to be quarantined
(Image: JIJI PRESS/AFP via Getty Images)

"It's a question of feeling each others' brow and seeing if we are showing symptoms of a fever," he added.

Pictures and footage emerged earlier this week on social media showing the empty corridors, deserted lounges and barren deck of the Diamond Princess.

A passenger using the handle @daxa_tw tweeted early Thursday morning that crew members handed out medication refill request forms for those in need of medicines. 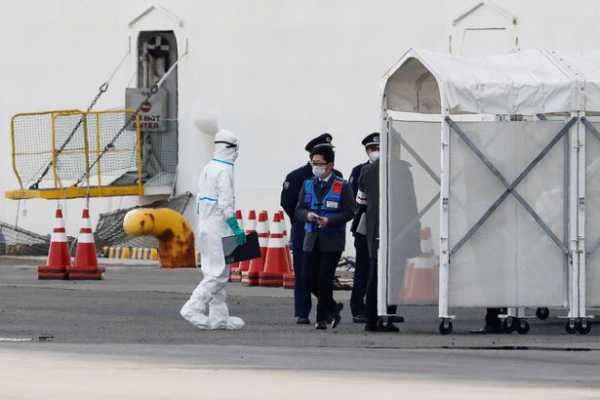 Passengers tested positive for the coronavirus aboard the locked down Diamond Princess are being taken into quarantine
(Image: REUTERS)

While a woman hung a Japanese flag that read "shortage of medicine" over the deck.

Kato said that the new patients would be transported to hospitals in Tokyo and other towns.

Live TV footage shows blue and white hoardings put up in the vessel where passengers diagnosed with the virus are moved out to medical facilities.

Out of the total rise in the toll, central Hubei province – epicentre of the outbreak – reported 69 deaths, including 64 in the provincial capital Wuhan.

The flu-like virus was first identified in Hubei's provincial capital and is believed to have originated at a seafood market in the city.

There have been two deaths outside mainland China – in the Philippines and Hong Kong – both following visits to Wuhan.

Hundreds of foreigners have been evacuated from Wuhan and placed in quarantine centres around the world.

The Diamond Princess is one of two cruise ships in Asian waters on lockdown.

Nostradamus prediction: Spain to take back Gibraltar if shock prophecy of...

Pregnant girl, 13, ‘raped by teenager’ rushed to hospital over baby...