Home Health Coronavirus lockdown: What life is like on the Princess cruise ship right... 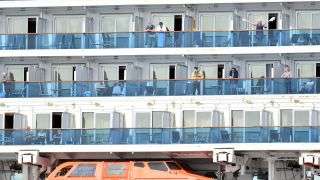 People look out from aboard the Grand Princess cruise ship, operated by Princess Cruises, as it maintains a holding pattern off the coast of San Francisco, California, on March 8, 2020.

For the past few days, the Grand Princess cruise ship, operated by Princess Cruises, has been anchored about 10 miles (16 kilometers) off the coast of San Francisco and not allowed to dock because of a coronavirus outbreak aboard the ship. Of the 3,500 people aboard the ship, 21 have tested positive for COVID-19. All passengers have been confined to their rooms since Thursday (March 5) with only a vague idea about what’s going to happen to them. The ship is now scheduled to dock at the Port of Oakland today (March 9), two days after the cruise was supposed to end, and the process is expected to be a multi-day process.

Princess Cruises has confirmed that one person was disembarked Saturday (March 7) for medical reasons unrelated to COVID-19.

What’s happening on the shipAll About Coronavirus

By mid February, most people were aware that the novel coronavirus was making its way around the world, yet there seemed to be little concern about the virus when passengers boarded the ship on Feb. 21 for Hawaii, said Laurie Miller, a passenger who’s currently stuck in her room aboard the Grand Princess. As they boarded, passengers were asked if they had been to China recently or if they had been in contact with anyone from China, she said. “That’s it. We thought there might have been more to it.”

Princess Cruises confirmed with Live Science that so far, 45 people aboard the Grand Princess have been tested for COVID-19. Of those, 21 were positive: 2 passengers and 19 crew members.

All passengers will eventually be tested for COVID-19, but not until they arrive at their final destination. The ship’s captain announced that all California residents aboard the ship will be tested at a local facility and out-of-state travelers will have to go to out-of-state facilities, Miller said, though he didn’t say what international passengers will need to do.

In the meantime, all passengers are forbidden from leaving their rooms. Miller and her husband John said they feel healthy, but are bored and frustrated. “We can see the Farallon Islands and we can see the Golden Gate Bridge,” Miller said. “We’re so close, yet so far away.”

The crew, wearing gloves and masks, delivers trays of food to their door three times a day. “No room service. They don’t come make the beds or change out the towels. They hand them to us through the door,” John said.

The ship’s medical office has asked passengers to let the crew know if they are running out prescription medication, and they’ve been working with local pharmacies and the U.S Coast Guard to get those prescriptions filled.

Making the best of a frustrating situation

“This is just such a surreal experience,” Miller said. “We’re fortunate that we live just in San Jose. I do feel for the people that have to travel out of state to get home, and I especially feel bad for those passengers who have an inside cabin on the ship with no window. And there are families with infants and young children, I don’t know what they’re doing.”

On Sunday (March 8), Princess Cruises announced in a press release that they were going to start allowing inside cabin passengers out of their rooms for a period of time under guidance from the Centers for Disease Control and Prevention.

The Millers count themselves lucky, as they’re confined to a mini-suite, which is a bit larger than some of the other rooms on the ship. “We have a balcony, which really, really helps a lot. We can go outside and get some fresh air. But yes, we are bored.” To pass the time, they watch TV, read books and play games on their iPads. “I spend a lot of time on Facebook updating friends and family about what’s going on,” Miller said.

But while communication with friends and family has been frequent, the opposite is true when it comes to getting updates from Princess Cruises.

“We hear from media outside and friends outside before the captain, so that’s frustrating,” Miller said. She said the captain has apologized for the delayed updates a couple of times, and seems sympathetic to the passengers’ frustration.

“Our frustration is with the officials who are trying to coordinate their plans for the passengers, and all the back and forth,” Miller said. “We want some answers; we want this resolved; we want to go home.”

When the weather is nice out, the passengers with balconies have been taking advantage of that luxury and go outside to chat with their sequestered comrades. Despite the circumstances, the mood seems lighthearted, Miller said. As a boat puttered close to the ship, she could hear people on their balconies yelling “Bring us pizza!” and asking for DoorDash (the food delivery service). “They’re just being silly,” she said.

The Grand Princess will undergo a “cleansing and sanitation procedure before returning to service.” a representative for the Princess Cruises told Live Science in an email. The company has adjusted their cruise itineraries but made few cancellations so far.

The Millers are cruise-ship veterans, and they said this experience won’t stop them from taking more cruises in the future, but maybe not anytime soon. They have another cruise scheduled in June with Viking Cruises in Norway, but the company has already notified guests that they can cancel without penalty. Considering how fast COVID-19 has spread, the Millers said they might take Viking up on that offer. “I have a feeling we’ll probably pass on that one and reschedule for another time.”