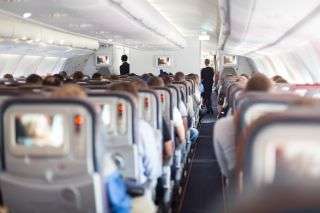 Passengers seated inside an airplane.

A few minutes after his flight reached cruising altitude, Dr. Alan Hunter responded to a flight attendant’s call for a doctor on board. A passenger was having a stroke, or so it seemed, the attendant said. This was certainly urgent — a passenger having a stroke could be one reason for an emergency landing.

But the passenger, whose face was drooping on one side, wasn’t having a stroke after all, Hunter determined. Rather, the passenger had an unusual yet typically temporary condition, resulting in part from pressure changes in the airplane. No emergency landing was needed, and with Hunter’s help, the patient was soon feeling fine.

Hunter, who is an internal medicine doctor at Oregon Health & Science University, said he had never seen a case like this before. To alert other doctors  about this condition, Hunter described the case in a report published Monday (Jan. 27) in the journal Annals of Internal Medicine.

Diagnosing patients on planes is “not something I do every day,” Hunter told Live Science. “I certainly wondered upon going [to the patient], ‘What would I be facing? … Would I have to divert [the plane]?'”

When Hunter responded to the call, the patient told Hunter that he’d had a sudden headache and pain and a sense of fullness in his ears, as well as slurred speech and drooling. But the case didn’t look like a stroke, Hunter said. When people’s faces droop on one side during a stroke, usually either the top or the bottom of the face is affected. In this case, the entire right side of the patient’s face was drooping. And the patient was young and healthy looking, making stroke less likely, Hunter said. The patient also mentioned that he’d just recovered from a cold.

“Ultimately, it just made sense that it was a pressure-related phenomenon” rather than a stroke, Hunter said.

If you’ve flown, you probably know the feeling: Your ears start to feel full and maybe even seem to pop as the plane climbs into the air. This happens because as the plane rises, the atmospheric pressure and the pressure in the cabin drop, while the pressure inside your ear stays the same, making your ear pressure relatively high. A canal called the eustachian tube connects the middle ear to the back of the throat, equilibrating the ear pressure to that of the environment. If the tube is closed or blocked, this can’t happen. Swallowing is one way to force open the tube, Hunter said.

Because Hunter suspected that the patient’s symptoms might be due to a clogged eustachian tube, he had the patient swallow a few times. He also gave the patient some extra oxygen. Within minutes, the patient was back to normal.

At the time, Hunter didn’t know exactly what condition he had just treated. But after he got off the plane, he did some research and found something called facial barotrauma, a condition that seemed to fit the current case. Most often described in scuba divers coming up from the deep, facial barotrauma occurs when a patient experiences a drop in pressure, and a blocked eustachian tube reduces blood and oxygen flow to one of the facial nerves. In the case of a diver, that pressure drop occurs as the patient swims toward the surface and water pressure lessens; in the case of an airplane passenger, it happens as the plane rises and atmospheric pressure drops.

According to Hunter’s research, this phenomenon happens only if the eustachian tube is somehow dysfunctional. The airplane passenger’s eustachian tube was probably blocked because of his cold, he said. The high pressure in the ear probably decreased blood flow to the facial nerve on the right side, causing the facial droop, he said.

“When I spoke with a lot of my peers, none of them had seen anything like that on a plane, so it just seemed like an opportunity to share this experience,” Hunter said. “I’m sure somebody will be called again for this at some point.”