Home Health HIV may hide out in brain cells, ready to infect other organs 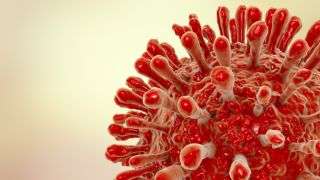 The HIV virus can take refuge in the brain even when treated with antiretroviral therapies, only to later infect other organs in the body if that treatment is stopped, a new study in mice and human tissue suggests.

Untreated HIV, the virus that causes AIDS, cripples the immune system and leaves the body vulnerable to life-threatening illness. Combination antiretroviral therapy, or cART, can significantly lower concentrations of the virus in the body, to the point that the pathogen can become undetectable, symptoms largely disappear and the treated person is no longer infectious to others. But cART must be taken daily, and if treatment pauses, the virus may reemerge from hidden sanctuaries in the body.

The new study, published June 11 in the journal PLOS Pathogens, suggests that one of these hideouts is in brain cells called astrocytes. Astrocytes constitute roughly 60% of the total cells in the human brain, according to the report, and in an infected person, the study authors estimate that between 1% and 3% of these cells could harbor HIV.

“Even 1% could be significant as a reservoir, as a sanctuary site, for the virus,” said study author Lena Al-Harthi, a professor and chair in the Department of Microbial Pathogens and Immunity at Rush University Medical Center in Chicago. “If we’re going to try to find an HIV cure, you can’t neglect the role of the brain as a reservoir.”

Al-Harthi and her colleagues drew their conclusions from a mouse model of HIV injected with human cells, as well as examinations of postmortem human brain tissue. While both experiments provide insight into the role of astrocytes in HIV infection, more work must be done to nail down exactly how the virus takes hold in human patients, an expert told Live Science.

“Animal models can tell us quite a bit. They’re not humans, but they can inform us quite a bit,” said Dr. Lishomwa Ndhlovu, a professor of immunology in medicine at Weill Cornell Medicine, who was not involved in the study. If astrocytes can act as a reservoir for HIV in human infection, and that virus can exit the brain and trigger infection elsewhere, as the mouse study indicates, “we do need to figure out how to eliminate the virus from these compartments” to devise a successful cure, he said.

Astrocytes, named for their star-like shape, come in a variety of subtypes and play critical roles in the central nervous system, according to BrainFacts.org, a public information initiative run in part by the Society for Neuroscience. The cells help deliver nutrients to neurons, or the brain cells that transmit electrical signals, and they can spur or subdue inflammatory reactions in the brain. Astrocytes also shape and maintain the wiring of the central nervous system and fortify the blood-brain barrier, a border of tissue separating circulating blood from brain cells.

Scientists knew that the HIV virus infiltrates the brain during infection, as infected people can develop dementia and other cognitive deficits.

“The role of astrocytes in HIV infection has always been controversial,” Al-Harthi told Live Science. Previous studies suggested that the star-shaped cells can become infected with HIV, but much of the research used cells in petri dishes, which may not replicate  infection processes in a living animal, Al-Harthi wrote in a 2018 report published in The Journal of NeuroVirology. A few studies have utilized live animals but used “traditional” methods, such as tagging viral proteins or genetic material with fluorescent compounds, to scan for the virus that may not be sensitive enough to accurately detect the low levels of HIV present in astrocytes. No study attempted to address whether, once infected, astrocytes could somehow release HIV to organs beyond the brain.

First, the authors placed human fetal astrocytes, derived from extracted brain tissue, in petri dishes and infected those cells with HIV. They then injected the infected cells into the brains of lab mice, one set of newborn mice and one set of adult mice. They found that, in both sets of mice, the infected astrocytes passed on the virus to CD4 cells — a type of immune cell that helps orchestrate the body’s immune response and are specifically targeted by the HIV virus.

After picking up an infection from astrocytes, infected CD4 cells migrate out of the brain and into other tissues. When “the brain is already seeded, the virus can come out and reseed peripheral organs,” Al-Harthi said.

In particular, the authors noted that the spleen and lymph nodes become infected as a result of this process. By blocking the movement of CD4 cells, the authors could cut this chain of viral transmission.

To ensure that the virus could infect astrocytes on its own, without their assistance, the authors also ran an experiment in which they injected healthy human astrocytes into mice and infected the animals with HIV afterward. In this scenario, some human astrocytes still became infected and released HIV into the rest of the body. Notably, the virus could still escape from the brains of mice given cART treatment, “albeit at low levels” compared to untreated mice. If the treatment was stopped, the virus from the brain triggered a full-blown infection.

To confirm aspects of their mouse experiments, the authors examined the donated brains of four HIV-infected individuals, all of whom received effective cART treatment. (The report did not specify how each donor died, but noted that the virus was effectively suppressed by cART at the time of death.) The team found that a small percentage of astrocytes contained HIV genetic material in their nuclei, indicating that the cells had been infected.

Working toward a cure

Many questions about astrocytes and HIV remain to be answered. For instance, certain subtypes of astrocytes may serve as reservoirs of HIV, while others don’t, Al-Harthi said. And while the mouse experiments demonstrated that HIV can exit the brain, the postmortem tissue analysis could not confirm that the same occurs in humans.

“Animal models, none of them are perfect,” so there may be differences in how infection unfolds in people, Al-Harthi said.

For example, during natural HIV infection, the virus can accumulate genetic mutations each time it replicates, and the genetic material required for infection can be lost in the process, Ndhlovu said. To fully understand the role of astrocytes in HIV, researchers will need to determine how much of the virus present in human astrocytes can actually trigger infection, he said.

Al-Harthi and her team began to address this question by examining postmortem brain tissue and analyzing what segments of HIV genetic material could be found within — but further studies will need to confirm that the found virus is both able to infect cells and migrate to other organs in the body, Ndhlovu said. In addition, scientists will need to determine the exact route HIV takes out of the brain in order to infect other organs, as that information would also be crucial for developing treatments that target the brain and finding a successful cure, he added.

Dying couple see snow one last time thanks to angel who...

This bacteria can survive on pure hydrogen. Could alien life do...