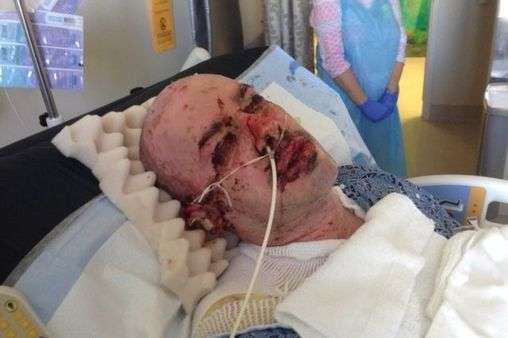 WARNING – DISTRESSING IMAGES: Jonathan Laird, 38, suffers from Stevens Johnson Syndrome, which makes the body burn from the inside. Jonathan, from Indiana, said he thought he was going to die

Jonathan Laird had to have his eyes stitched shut because of Stevens Johnson Syndrome (SJS) (Image: MDWfeatures / Jonathan L)

A man had to have his eyes stitched shut and his body covered in pig skin because of a rare condition which causes patients to burn from the inside.

Jonathan Laird, 38, feared he was going to die after developing the deadly condition – a reaction to medication he was taking.

At first he experienced flaky skin and sore eyes, but this soon developed into blisters as doctors battled to save his life.

Jonathan, from Greenfield, Indiana, USA, spent 11 days in intensive care – during which time he wrote a note to his parents asking if he was going to die – before being transferred to a burns unit.

He developed Stevens Johnson Syndrome (SJS), which is a side effect of  drug Lamictal, which he was prescribed for depression. 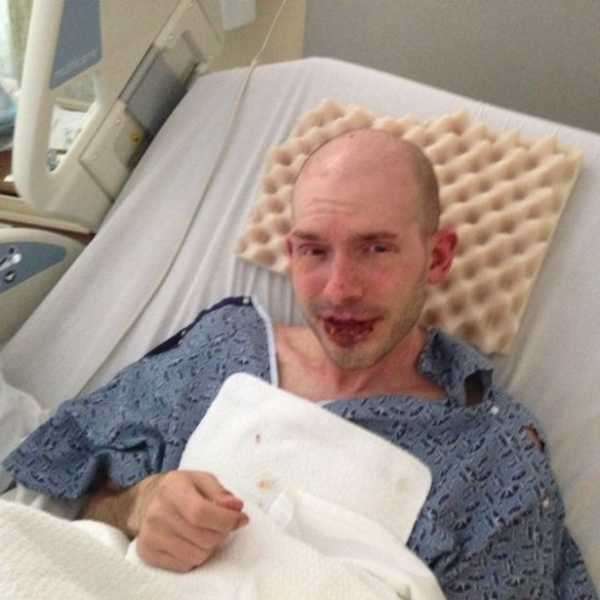 He said he felt as though he had glass in his eyes as he recounted his horrific experience.

Within a month of taking Lamotrigine, Jonathan began to feel unwell and on May 10 woke up to conjunctivitis in both eyes and flaking skin on his chest, symptoms that although were uncomfortable, were not immediately concerning.

"When you have this condition, it attacks your mucous membranes; your eyes, your mouth, and other areas," Jonathan said.

"When I woke up in the (following) morning I felt some bumps inside my mouth with my tongue and I thought 'well what is that? That's weird.' 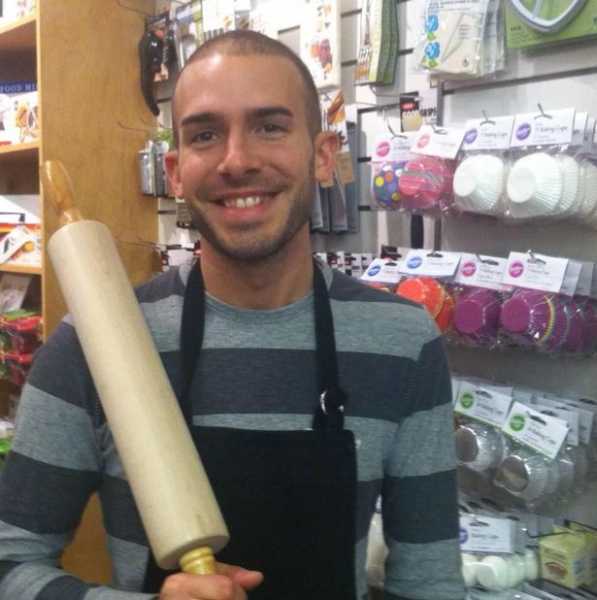 "So, I got up, went into the bathroom and I looked in the mirror and I saw I had like three or four sores on my outer lips.

"They were like blackish red and when I opened my mouth and used my phone's flashlight to see better, I could see in the back of my throat I had like two or three different bumps that were the same colour, like sores.

"My eyes started to feel like they had little pieces of glass in them, it was very uncomfortable, and I was scared to touch them or rub them because it literally felt like I was going to cut my eyes. 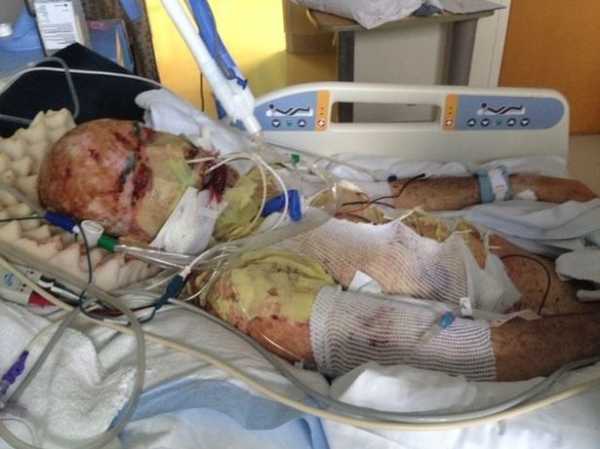 He was covered in pig skin to prevent his body from burning
(Image: MDWfeatures / Jonathan L)

"I thought, 'Is this Stevens Johnson Syndrome? I can't imagine I would actually get this but is that what this is?'"

Jonathan drove himself to the hospital where a physician agreed that he had early SJS. He immediately stopped taking his medication.

Despite his symptoms, Jonathan was discharged and told to go and see his regular doctor and an eye doctor.

But within hours Jonathan's symptoms had worsened- he had as many as 50 sores in his mouth and a rash had spread across his chest and back. He was admitted to the hospital where he stayed overnight. 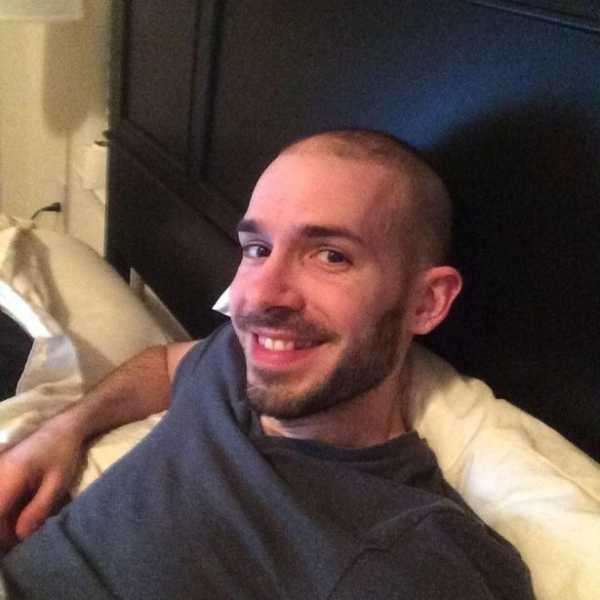 Jonathan developed the condition because of an adverse reaction to medication
(Image: MDWfeatures / Jonathan L)

The following day, Jonathan was transferred by ambulance to Harbour View Medical Centre in Seattle, Washington where he was placed in the Intensive Care Unit.

"When you have Stevens Johnson Syndrome you basically burn from the inside out. It starts as a rash and then the rash erupts into blisters," Jonathan said.

"They stitched my eyes shut to protect my vision, they bound my hands together so I couldn't rip the tube out that was down my throat.

"I don't remember much. I fell in and out of consciousness. I felt like I was dreaming all the time, I don't think I really knew that my eyes were stitched shut. 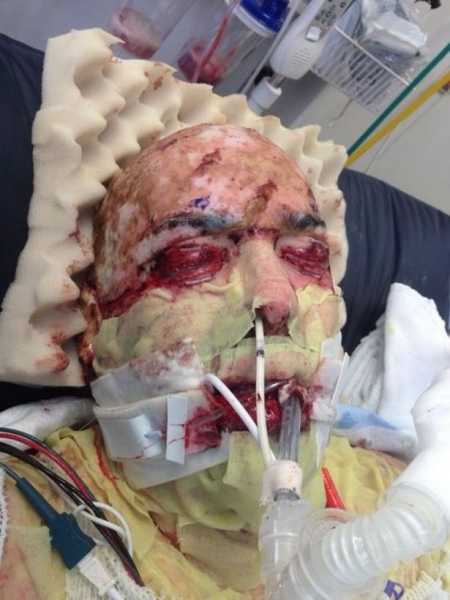 The condition makes a patient's body burn from the inside
(Image: MDWfeatures / Jonathan L)

"I had to communicate with my parents with pen and paper because I couldn't talk, so they would say something, and I would write (my answers).

"I said something like, 'Am I going to die?' because I didn't know and that was really hard for them to read. I just looked horrible, I looked like a plane crash.

"They also put pig skin all over me and that's to prevent infection. They were afraid I was going to get pneumonia at one point, so they had to make sure that everybody who came to see me had gloves on and gowns."

Despite concerns for Jonathan's life, he was eventually transferred to a burn unit after 11 days in the ICU. 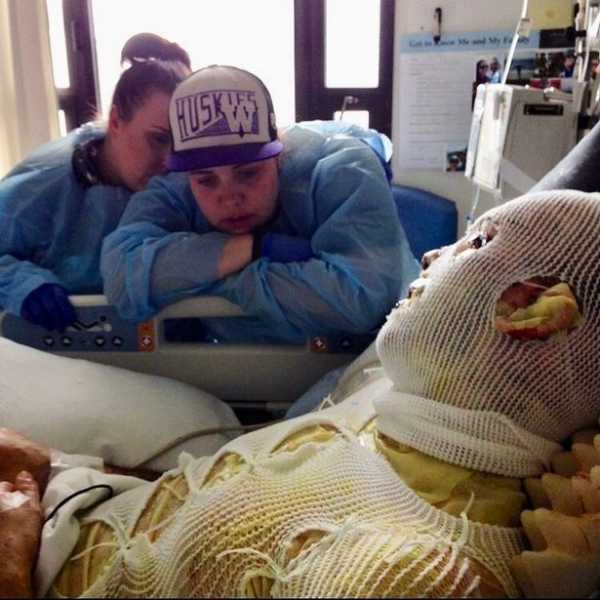 Jonathan's friends and family by his bedside in hospital
(Image: MDWfeatures / Jonathan L)

For the first time in almost two weeks Jonathan could talk, eat and drink, but his struggles continued.

"Even simple things like going to the bathroom I couldn't do without calling for a nurse. I felt very vulnerable," continued Jonathan.

"One of the nurses I remember was amazing she took me into the shower so I could have my first shower in three weeks and I had to get naked in front of her, and I started crying, I just felt completely vulnerable.

"I was at this person's mercy who had to guide me and bathe me and it was just a really weird feeling."

On June 1 Jonathan was released from the hospital and has continued to recover ever since. His journey as a Stevens Johnson Syndrome survivor has led him to write a blog on the condition, in the hope that it will offer support to anyone affected by the condition.

"You're not alone," Jonathan said.

"Even though it's a rare condition there are millions who have been affected by this, including children, and lot of people have survived and gone on with their lives, and you will to.

"Be brave and you'll get through this, and the person you're going to be on the other side of this is a much stronger person."

Boy, 6, ‘dies after being hit by truck while riding bike...