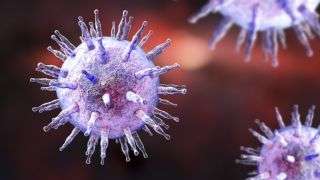 A type of herpes virus, one that causes mono, can in rare cases raise the risk of developing certain types of cancer. And now researchers know how: The Epstein-Barr virus (EBV) can directly latch onto bundles of genetic material in infected cells, and switch “on” nearby genes that turn healthy cells cancerous, according to a new study in human cells.

Not all people who become infected with EBV go on to develop cancer; but in rare instances, the virus can raise people’s risk of developing nasopharyngeal cancer, Burkitt’s lymphoma and certain stomach cancers, according to the American Cancer Society. While more than 90% of people catch the virus worldwide, only about 1.5% of cancer cases are linked to the infection, according to a 2019 report in the journal Annual Review of Pathology. Other viruses that drive cancer growth, such as hepatitis B and human papillomavirus (HPV), do so by worming their way into the genomes of their infected host — but EBV takes a different approach, researchers just found.

Rather than intertwining with host DNA, EBV DNA binds to the surface of the host DNA in a way that makes the molecule change shape, and that turns on cancer-related genes nearby, study author Patrick Tan, executive director of the Genome Institute of Singapore and a professor at the Duke-NUS Medical School, told Live Science in an email. The research, published July 27 in the journal Nature Genetics, pinpoints where on the host genome the viral DNA grabs hold.

Understanding this process could allow scientists to develop drugs and gene therapies to undo the virus’s harmful modifications, Rona Scott, an associate professor of microbiology and immunology at Louisiana State University Health Shreveport, who was not involved in the study, told Live Science in an email.

In addition, “identifying footprints [or telltale marks] of EBV infection in cancer may help us determine if EBV, which infects over 95% of adults worldwide, contributes to other cancers not yet associated with this virus,” she said.

While some of the details remain fuzzy, “the link between EBV and certain types of cancer has been known for many years,” Tan said. For example, the virus has been linked to about 8% to 10% of stomach cancers, which collectively stand as the third leading cause of cancer death globally, according to a statement from Duke-NUS Medical School.

Past research explained one way EBV fuels cancer: The virus triggers chemical reactions that stick molecular tags known as methyl groups onto genes, switching them “on” or “off,” according to a 2007 report in the journal Cancer Science. One theory was that these so-called epigenetic modifications, meaning modifications “on top of” the genome, disabled genes that would normally suppress tumor growth.

But Tan wondered whether EBV was also changing the 3D structure of the host genome in ways that up the risk of cancer.

Cells package DNA in organized bundles called “chromatin,” with some genes tucked inside the bundle, unreachable by cellular machinery that translates those genes into protein. Chromatin’s structure therefore determines which genes can be turned on or off, and at what time. While this is a helpful control mechanism in healthy cells, certain changes to the chromatin’s structure can spur cancer development, according to a 2016 report in the journal Science — Tan and his colleagues thought EBV might warp host chromatin in this way.

To find out, the team examined healthy stomach cells and cancerous stomach cells grown in culture, as well as cells sampled from patients with EBV-related stomach cancers, to compare the structure of their genetic material.

They found that EBV DNA, also packaged into chromatin bundles, bound directly to specific spots within the chromatin of infected stomach cells. Namely, the viral DNA latched onto regions of the host genome known as genetic enhancers, which help to activate specific genes. Although switched off in the healthy cells sampled, these enhancers turned on in response to EBV infection and boosted the activation of cancer-related genes, specifically ones that stimulate cell growth and proliferation, the authors found. When dysregulated, these genes can spur tumor growth.

“We were definitely very surprised by the results,” as we did not expect the viral genome to directly participate in rewiring the host cell, and controlling which proteins it builds, Tan said.

Even when the authors removed EBV from infected cells, the structural changes the virus made to host DNA stayed put. The finding supports prior evidence that EBV may contribute to cancer in a “hit-and-run” manner, meaning that even if you eliminate the virus itself, the cell’s DNA remains altered and continues to drive tumor growth, Scott said.

But that theory must be confirmed in future studies, Tan added. The team also aims to study if genes that are modified by this process can serve as new drug targets to treat EBV-related cancers, he said.

Perhaps other factors, such as the innate defenses the cells use against viruses, determine which genes EBV can manipulate and in which people, though that must also be confirmed, Scott added.

In many EBV infections, the virus carries out its life cycle tucked away in immune cells called B cells and epithelial cells, which line surfaces of the body, “without much consequence” to the infected person’s health, Scott noted. However, in the instances when the virus does contribute to cancer, undermining its ability to reshape the host DNA may be a critical route of treatment, she said.

Why are satellites made of metal and not wood?