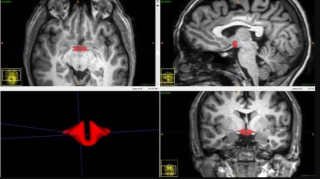 Brain MRI images showing the hypothalamus, in red. A new study finds that this brain region is smaller in women who use birth control pills, compared with women not taking the pill.

Birth control pills may slightly alter the structure of women’s brains, according to a new study.

The study found that women taking the pill, or oral contraceptives, had a smaller hypothalamus than women not taking the pill. The hypothalamus is a pea-size structure deep inside the brain that helps regulate involuntary functions, such as appetite, body temperature and emotions. It also serves as a link between the nervous system and endocrine system, a network of glands that produce hormones.

About 150 million women use oral contraceptives worldwide, according to a 2019 report from the United Nations’ Department of Economic and Social Affairs. Despite their widespread use, research looking at how oral contraceptives affect the brain is sparse. “It’s a pretty understudied area,” said Dr. Michael Lipton, professor of radiology at Albert Einstein College of Medicine in New York, who led the recent research.

The new study, which will be presented today (Dec. 4) at the annual meeting of the Radiological Society of North America, is the first to look at the pill’s effects on the hypothalamus. To gauge the structure’s volume, the researchers used MRI scans of 50 women, 21 of whom were taking a combination pill — a common type of birth control pill that provides a dose of synthetic estrogen and progestin. The team also had the women complete online interviews and standardized tests to assess aspects of their mood, personality and cognitive functions.

On average, the women taking the pill had a hypothalamus that was about 6% smaller than it was in women not taking the pill, the study found. For a brain region, “that’s a pretty sizable difference,” Lipton said.

Given that the hypothalamus produces hormones that regulate the body’s endocrine system, the results are not all that surprising, said Jonathan Schaffir, associate professor of obstetrics and gynecology at The Ohio State University, who was not involved in the research. Birth control pills may be telling the hypothalamus that it doesn’t need to produce these hormones. In fact, prior studies have shown that sex hormones promote neurons’ growth, Lipton said. One hypothesis is that the synthetic hormones in oral contraceptives interfere with these effects and lead to less brain cell growth.

Still, exactly what the effects of a smaller hypothalamus might be are not entirely clear, Lipton said. The study shows that women taking the pill do not have smaller brains overall and that their mental abilities are not affected. However, the researchers did find that a smaller hypothalamus is associated with increased anger and symptoms of depression.

But Lipton cautions that these are preliminary findings from a small study and don’t prove cause and effect. In other words, the researchers cannot prove that birth control pills directly cause a smaller hypothalamus.

Indeed, the effects of oral contraceptives on the brain  remain unclear. A growing body of evidence, including the current study, suggests that there are differences in the volumes of certain brain regions in women on birth control pills, said Nicole Petersen, a neuroendocrinology researcher at the University of California, Los Angeles, who was not involved in the study. But findings on this topic haven’t always been consistent — some studies suggest that women on the pill have smaller brain structures, while others reveal they have bigger or similar-size structures, she said.

It’s still too early to conclude how oral contraceptives affect the brain, if at all, Lipton said. “We’re not saying that people should run out and throw away their birth control pills,” he said. If anything, the results may simply point to a question that warrants more research, he added.