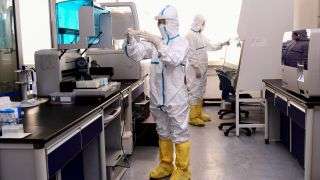 Lab technicians test samples from people suspected of having the COVID-19 coronavirus at a laboratory in Shenyang in China’s northeastern Liaoning province on Feb. 12, 2020.

As the new coronavirus continues to infect people around the world, the rush to test for the virus has taken on a new urgency. But the United States is lagging on that front, in part due to faulty test kits and strict regulations, experts told Live Science.

“We’re not remotely prepared,” Dr. Alex Greninger, an assistant professor in the Department of Laboratory Medicine and an assistant director of the Clinical Virology Laboratory at the University of Washington Medical Center, told Live Science.

Currently, 57 individuals in the U.S. have COVID-19, the illness associated with the novel coronavirus. The United States has been “exceptionally fortunate to not have [had] many cases,” Greninger said, but the Trump administration has wasted precious time, which could have been used to develop and disseminate tests for the virus in all 50 states.

When news of the virus first broke at the end of December 2019, doctors in the U.S. sent specimens to the Centers for Disease Control and Prevention (CDC) in Atlanta for testing. For instance, when a man in Snohomish County, Washington, became the first person in the country to be diagnosed with COVID-19, doctors used FedEx to ship his samples overnight to the CDC, which verified the diagnosis the next day.

In early February, the CDC sent testing kits to labs across the U.S., but a glitch in the kits made them unusable. Now, more than a month later, just five state health departments — in California, Illinois, Nebraska, Nevada and Tennessee — as well as the CDC, have the ability to test for the virus, known as SARS-CoV-2.

There’s so much backlog now, that getting results from the CDC can take several days, said Dr. William Schaffner, an infectious-disease specialist at Vanderbilt University in Tennessee.

Other U.S. institutions, both public and private, are working to set up testing centers. But in order to diagnose SARS-CoV-2, scientists have to obtain, verify and run the current CDC test. Or, they can file an application for a new testing protocol and get it approved by the Food and Drug Administration. Both processes can be difficult, especially when it comes to obtaining positive control materials — in other words, samples of the virus itself so that scientists can compare new cases to it, Greninger said.

The situation is so dire, that Sen. Brian Schatz, D-Hawaii, said he is asking the CDC if Hawaii can get testing kits from Japan, according to Hawaii Public Radio. (A Japanese tourist to Hawaii was later diagnosed with COVID-19.) But even this test would have to go through FDA approval, Greninger said.

Only certain people can take the SARS-CoV-2 diagnostic test. The CDC requires that patients with suspected COVID-19 meet a certain criteria before being tested, including having a fever. But people with mild cases of the virus might not have a fever, Schaffner said.

“There are discussions that many of us have had that we would like the testing criteria to be relaxed more, not made quite so stringent,”  Schaffner told Live Science. “[But] I suspect the criteria for testing will open up once the laboratories become comfortable in doing the test and they know they have a regular supply of the reagents.”

These strict protocols may explain, in part, why as of Feb. 26, just 445 people have been tested for SARS-CoV-2 in the U.S., not including travelers who have returned on evacuation flights, such as those from the Diamond Princess cruise ship. In contrast, as of Feb. 25,  South Korea has tested more than 35,000 people for the virus, The Washington Post reported.

It’s impossible to understand the breadth of the virus if the U.S. doesn’t test for milder cases, which will help doctors determine the ratio of mild to severe infections, said Dr. Amesh Adalja, an infectious-disease specialist and a senior scholar at the Johns Hopkins Center for Health Security in Baltimore.

“If the criteria is only to test people who have severe illness, we’re going to be missing other cases,” Adalja told Live Science. “And in order to do that we need to have much more widely distributed tests.”

The U.S. dropped the ball in getting tests out quickly and making them widely available, the experts told Live Science. But they expressed hope that the country would rise to the challenge soon.

“I think we’re on the way to having testing resources to match the need, but we’re not quite there yet,” said Schaffner, adding, “this is always the case when you’re dealing with a new infectious agent.”