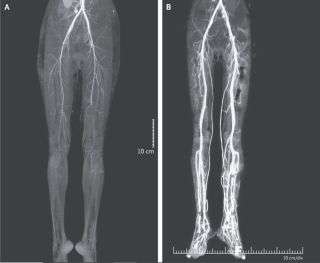 A burning pain in a woman’s legs was due to ergotism, a disease that causes restriction of blood flow. The image shows a CT scan of the woman’s legs before and after treatment for the disease.

A woman’s migraine medication caused a rare reaction: a burning sensation in her legs and the loss of one of her toes, according to a new report of the case.

Doctors diagnosed the woman with ergotism — also known as  St. Anthony’s fire — a now uncommon condition that once caused mysterious outbreaks in medieval Europe. Her medication was derived from the same natural chemical behind these historical outbreaks.

The 24-year-old woman went to the doctor after she suddenly began to experience a severe burning pain in her legs, from her midthigh down to her toes, according to the report, published Wednesday (July 22) in The New England Journal of Medicine. She also had discoloration in her feet and trouble walking, and both legs were cold to the touch, according to the authors, from Government Medical College in Thiruvananthapuram, a city in southern India. Four days earlier, she had started taking a medication called ergotamine for migraine headaches. The woman was also born with HIV and was taking several antiviral medications to treat the disease.

A CT scan revealed that the arteries in both her legs had narrowed and thus reduced blood flow to the area.

Based on her symptoms, her doctors suspected she had ergotism, a disease traditionally caused by ingesting poisonous compounds made by a fungus called Claviceps purpurea, which infects cereal grains such as rye. In the Middle Ages, the disease caused large outbreaks among people who ate tainted rye, according to the American Society for Microbiology (ASM). Afflicted individuals developed mystifying symptoms including burning pain and gangrene in their limbs, while others experienced convulsions and hallucinations. Some researchers hypothesize that ergotism was also behind the mysterious symptoms experienced by girls accused of «bewitchment» in the 17th-century Salem witch trials, according to a 2016 paper in the journal JAMA Dermatology.

C. purpurea produces compounds called «ergot alkaloids,» which affect the cells that line blood vessel walls and lead to constriction, or narrowing, of the blood vessels, resulting in reduced blood flow, according to a 2016 paper in the International Journal of Angiology.

Public health measures to prevent ergotism — such as removal of infected grains (which appear black) from the harvest — started in the 1800s, and the disease has been rare since then, according to ASM. But the same fungal compounds that cause ergotism were later isolated and used for medical purposes, including treatment of headaches, as is the case for the drug ergotamine. Today, most cases of ergotism are due to ergot alkaloid treatments, for instance, if the doses are too high or the treatment is prolonged, ASM said.

But people can sometimes develop ergotism even when taking normal doses of ergot-based drugs. This happens when people are taking other medications that lead to a drug interaction. One such drug is the HIV medication ritonavir, which blocks the enzyme involved in breaking down ergot compounds, according to a 1999 paper in the journal BMJ. Because of this interaction, the National Institutes of Health warns that people should not take ergotamine if they also take certain  HIV medications.

The woman in this case was taking ritonavir as part of her HIV treatment. Doctors treated her ergotism with the blood-thinning drug heparin, and her symptoms soon improved — her pain subsided and her legs became warmer. However, the treatment didn’t come soon enough to prevent gangrene in one of the toes on her left foot, which had to be amputated. A CT (computed tomography) scan two weeks later showed improved blood flow in both legs, the report said.