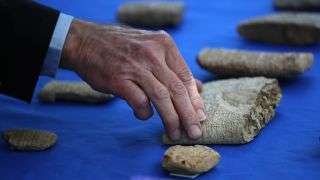 Cuneiform tablets from a lost city called Irisagrig in Iraq were returned to Iraq after being seized from Hobby Lobby.

About 1,400 cuneiform tablets that were possibly stolen from Irisagrig, a 4,000-year-old lost city in Iraq, have just been revealed.

Even though archaeologists know the tablets originated in that lost Sumerian city, they don’t know where the city is now located. Only looters have that location, archaeologists said.

The newly examined tablets describe the palace of Irisagrig and the animals kept on the grounds, including lions and dogs; the tablets also detail a festival held in a temple dedicated to a god of mischief.

The new find shows that the company Hobby Lobby — whose co-owner, Steve Green, helped found the Museum of the Bible in November 2017 in Washington, D.C. — had far more cuneiform tablets obtained (possibly illegally) from this city, and other sites in Iraq, than previously believed.

The 1,400 Irisagrig tablets, along with 600 cuneiform tablets from other archaeological sites in Iraq, are detailed in the book “Tablets From the Irisagrig Archive” (Eisenbrauns, 2019) by Marcel Sigrist, professor emeritus at École biblique et archéologique française de Jérusalem, and Tohru Ozaki, a retired lecturer at the University of Shizuoka in Japan.

The tablets were recorded by hand, but not photographed, between 2012 and 2016, during which time “they were in Oklahoma in the storerooms of Hobby Lobby,” Sigrist told Live Science. “They bought these tablets — I never knew how it happened. It was not really my business” Sigrist said.

In 2017, Hobby Lobby paid a $3 million fine for importing artifacts illegally from Iraq, and the company forfeited about 450 cuneiform tablets and 3,000 clay bullae (a type of seal) that were returned to Iraq, a settlement statement from the U.S. Department of Justice said. However, 223 of those 450 cuneiform tablets were seized in January 2011 in Memphis, Tennessee, by U.S. Customs and Border Protection. Though Sigrist didn’t have the opportunity to study those tablets, another scholar, named Eckart Frahm, did. He described them in a 2017 interview with Live Science. A few of those 223 tablets contain 4,500-year-old magical incantations, Frahm said at the time.

After the Sigirst and Ozaki studied the tablets, some of the artifacts now appear to be missing. John Marzulli, a spokesperson for the U.S. Department of Justice, said that, aside from the 450 cuneiform tablets mentioned in the 2017 settlement statement that announced Hobby Lobby’s fine and forfeiture of artifacts, he has no information about any other cuneiform tablets once owned by Hobby Lobby.

Sigrist said that after 2016 he never received any communication from Hobby Lobby. “When I approached them, I never received any answer anymore,” and he decided to describe the tablets in a publication so that scholars could become aware of the artifacts’ existence. Hobby Lobby has not responded to requests for comment.

The newly published cuneiform tablets tell of numerous economic and administrative transactions that happened at Irisagrig. Inscriptions on the tablets describe how the rulers of the city kept lions and fed them with the carcasses of cattle. The “lion shepherds,” those who took care of the lions, received rations of beer and bread.

The tablets also tell of the many dogs that were kept in Irisagrig’s palace, mentioning the carcasses of animals that were fed to them and how the “dog shepherds,” those who cared for the dogs, got rations of bread and beer. Dogs were very important for the security of the palace, Sigrist said. “When you are in the desert, you need protection, custodians, and the dogs are the best custodians you can have in these areas,” he said.

The tablets tell of food given out at a king named Amar-Suen’s festival, which took place at the Temple of Enki, a god of mischief and wisdom. The tablets also tell of the numerous officials who served the king, such as the “sagi,” officials who were often cupbearers to the kings of Irisagrig.

The newly described tablets date to a time when Irisagrig was involved in few conflicts and things were fairly peaceful, Sigrist said. In later times, Irisagrig’s territory fell victim to invasion and wars. 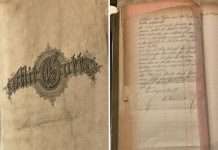 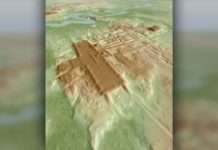