Home Planet Earth A meteor that crashed to Earth 790,000 years ago left a crater... 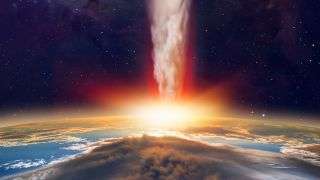 An ancient impact scattered bits of glassy debris from Asia to Antarctica, but the resulting crater has long eluded detection.

About 790,000 years ago, a meteor slammed into Earth with such force that the explosion blanketed about 10% of the planet with shiny black lumps of rocky debris. Known as tektites, these glassy blobs of melted terrestrial rock were strewn from Indochina to eastern Antarctica and from the Indian Ocean to the western Pacific. For more than a century, scientists searched for evidence of the impact that created these pitted blobs.

But the crater’s location eluded detection — until now.

Geochemical analysis and local gravity readings told researchers that the crater lay in southern Laos on the Bolaven Plateau; the ancient impact was concealed under a field of cooled volcanic lava spanning nearly 2,000 square miles (5,000 square kilometers), the scientists reported in a new study.

When a meteor hits Earth, terrestrial rocks at the impact site can liquefy from the intense heat and then cool into glassy tektites, according to the Jackson School Museum of Earth History at The University of Texas. Scientists can look at the abundance and locations of tektites to help locate an impact, even if the original crater is eroded or concealed, the study authors wrote.

In this case, there were plenty of tektites — so where was the crater?

The force of the impact is thought to have created a rim measuring more than 300 feet (100 meters) tall, according to the study. Tektites from the impact were at their biggest and most abundant in the eastern part of central Indochina, but because the tektites were so widespread, previous estimates of the crater’s size ranged from 9 miles (15 km) in diameter to 186 miles (300 km), and the feature’s precise position remained uncertain even though scientists spent decades searching.

For the new study, the researchers first investigated several promising eroded crater candidates in southern China, northern Cambodia and central Laos, but soon ruled out those spots. In all cases, the suspected crater-like features turned out to be much older and were instead identified as erosion in rocks dating to the Mesozoic era — about 252 million years ago to about 66 million years ago.

Was the crater buried? On Laos’ Bolaven Plateau, the scientists found a site where fields of volcanic lava might have hidden signs of an older meteor impact. In a region that the researchers targeted as a likely spot for a crater, most of the lava flows were also in the right age range: between 51,000 and 780,000 years old.

The study authors peered below the lava’s surface by taking gravity readings at more than 400 locations. Their resulting gravity map showed one area “of particular interest” with a gravitational anomaly, a subsurface zone less dense than the volcanic rock surrounding it. Their measurements hinted at an elliptical, “elongated crater” about 300 feet (100 m) thick, about 8 miles (13 km) wide and 11 miles (17 km) long, according to the study.

Together, all of these clues suggested that “this thick pile of volcanic rocks does indeed bury the site of the impact,” the scientists wrote.

The findings were published online Dec. 30 in the journal Proceedings of the National Academy of Sciences.

Madagascar’s bizarre aye-aye has 6 fingers on each hand, scientists discover