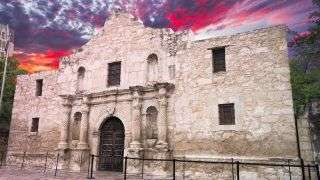 The discovery of three human graves in the church of the Alamo in San Antonio has reignited a dispute over the Native American presence at the historic site.

The bodies appear to be those of a teenager or young adult, a large adult and an infant, authorities said.

The state of Texas and the city of San Antonio are in the early stages of a $450 million plan to redevelop the historic site. An archaeological investigation of Alamo Plaza, the city area surrounding the Alamo’s historic buildings, has already been completed, the San Antonio Express-News reported.

The site is famous for the Battle of the Alamo in 1836, when fewer than 200 “Texian” defenders — including Jim Bowie and Davy Crockett — held out for 13 days battling almost 2,000 Mexican soldiers.

Although the Texians lost and most of the defenders were killed, “Remember the Alamo” became a battle cry, and the siege led to Texas becoming part of the United States in 1846.

But opponents of the redevelopment plan, including some Native American groups, argue that it does not take enough account of the historic importance of the Alamo before the siege of 1836. This dispute has led to legal action, and it has now been exacerbated by the discovery of the bodies, which may be Native American, discovered at the Alamo church.

The plan’s opponents say that the full extent of the Alamo burial ground should first be investigated, and that memorials at the site should emphasize its 150 years of history before 1836.

“Conducting a full archaeological survey should be part of this project,” said Gabriel Velasquez, a member of San Antonio’s Historic Design and Review Commission, who has voted against parts of the redevelopment plan.

Archaeologists found the graves containing the three bodies in the nave and what’s known as the Monk’s Burial Room inside the Alamo church, according to a statement by The Texas General Land Office (GLO).

The GLO, an agency of the state of Texas, owns the church and the “Long Barracks” building at the site — the only two structures that have survived, almost intact, since the 1836 siege.

But in the 18th century, the Alamo was a Spanish mission known as the Misión San Antonio de Valero, built for the education of local Native Americans after their conversion to Roman Catholicism.

The site was also used as a burial ground for up to 1,300 people — mainly indigenous — who had converted to Christianity, according to some Native American groups.

The bodies were found during work to install moisture monitoring equipment inside the church, and to locate and document the foundations of the 300-year old structures, according to the GLO statement.

In response to the discovery, excavations of the burial sites were halted while a “long-established protocol” to protect the human remains was activated, the statement said.

It is not the first time that human graves have been found the Alamo site. Some remains were found in the church in 1989 and 1995, and more human remains are thought to be interred there.

Officials from the Alamo Trust, which administers the site for the Texas General Land Office, declined to speak to Live Science about the discovery of the bodies.

But a spokesperson for the GLO told the New York Times that procedures in place for the discovery of human bodies at the site were properly followed. “The GLO has long recognized the Alamo as a burial ground and will ensure that this history is told in the future museum,” spokesperson Karina Erickson said.

Many people who oppose the current city and state redevelopment plan for the Alamo contend that it glorifies the events of 1836 at the expense of the previous use of the mission building — as the center of an early Christian community and a burial ground for Native American converts.

City commissioner Velasquez said that the protocol for dealing with human remains at the Alamo site treats them only as discoveries of individual graves and not as parts of a larger burial ground.

“If we are dealing with a cemetery, then it is disingenuous for us to be dealing with it with this ‘found grave’ philosophy,” Velasquez told Live Science.

While the Battle of the Alamo in 1836 deserved to be commemorated, “….underneath that history is a marker of the conversion of the Native Americans of this area of the country, if not the country as a whole,” Velasquez said.

Until a full archaeological survey of the entire Alamo site is carried out, still more human remains will be found there, he said.

“It keeps happening and it’s going to continue to happen if we treat all of these remains as if they are not part of one community of the dead,” he said. “These are not unrelated burials.”

Extraterrestrial Mineral Never Before Seen on Earth Found Inside a Famous...