Home History Ancient game board could be a missing link tied to the Egyptian... 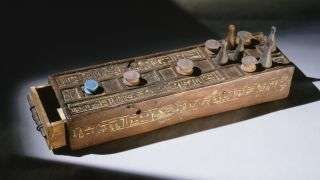 In the New Kingdom, the fate of the deceased in the afterlife was reportedly affected by success in playing senet with underworld opponents. Here, a game board for senet, though not the board from the Rosicrucian Egyptian Museum in California.

A game board that dates back to before the reign of the pharaoh Hatshepsut may represent the transformation of the game senet from fun pastime to religious symbol.

Senet is ancient, dating back some 5,000 years to Egypt’s first dynasty. The game was played on a board with 30 squares arranged in a 3-by-10 rectangle. The precise rules are lost to history, but players had to move a set of pawns across the board, with moves determined by throws of a set of two-sided sticks. The squares were blank except for squares 26 to 29, which contained the same progression of symbols: one for goodness, one for water, one for the number three and one for the number two.

By the era of the New Kingdom of Egypt, which began in about 1550 B.C., these game boards had acquired a religious symbolism, appearing in the Egyptian Book of the Dead. The game seemed to represent the soul’s journey through the afterlife. Over time, the markings on senet boards also became more elaborate.

But there are major gaps in the historical record of senet. For example, though there are tomb carvings and paintings that show game boards and that date from between the fourth and sixth dynasties (a span of more than 400 years, between 2613 B.C. and 2181 B.C.), no archaeologist has ever found a game board known to date from this period, Walter Crist, an anthropologist at Maastricht University in the Netherlands, wrote in a new paper published in The Journal of Egyptian Archaeology.

Now, a new examination of a never-before-studied senet board from the Rosicrucian Egyptian Museum in San Jose, California, reveals a style of game board that may bridge the gap between Egypt’s Middle Kingdom and subsequent New Kingdom.

The exact age of the board is unknown. It was purchased from a British antiquitarian’s collection in 1947 and was probably taken from Egypt before the advent of modern archaeology, Crist wrote, when antiquities were removed from tombs and archaeological sites with no concern for their historical context. Though the board is wooden, it has never been radiocarbon dated, so Crist could gauge its age only by its style.

That style was intriguing. Over the long history of senetthe board orientation changed. For most of ancient Egypt’s history, play started on the top left of the board and ended with the decorated squares on the bottom right. For a period during the Middle Kingdom, though, the decorated squares were placed at the top of the board and play switched to starting on the bottom right and ending on the top left.

The San Jose board is marked with cursive hieroglyphic writing depicting a symbol for goodness, a symbol for water, three seated men and two seated men. The closest examples to such markings are found on a board from the tomb of Hatshepsut, the female pharaoh who reigned during the 18th dynasty between 1478 B.C. and 1458 B.C. Another board with similar markings has a murkier history but may come from the reign of Hatshepsut’s successor, Thutmose III.

The Middle Kingdom orientation and New Kingdom decorations suggest that the board at the Rosicrucian Egyptian Museum was a transitional step between simple senet games and the more decorative and religiously relevant games of later years, Crist wrote. The latest known game with the Middle Kingdom orientation is a sketch made of ink on a schoolchild’s writing tablet dating to Egypt’s 17th dynasty, about 70 years before Hatshepsut reigned and boards with markings like those on the Rosicrucian game board became the norm.

“[T]his game is a likely candidate to fill that stylistic gap,” Crist wrote. Radiocarbon dating, he added, could help nail down the age of the board and confirm whether it is, in fact, a gamer’s missing link.