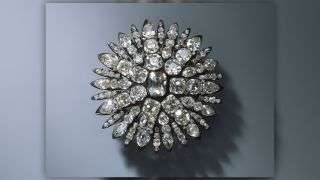 One of the items stolen from Dresden’s Royal Palace was a sun-shaped, diamond hair ornament that dates to the late-18th century and once belonged to the queen.

In two daring heists that took place just days apart in Germany, burglars stole precious gems and artifacts from museums in two cities. Then they vanished without a trace and are still at large.

The robberies — which are not thought to be related — happened in Dresden and Berlin, according to German news site Der Tagesspiegel. On Nov. 25, two thieves broke into Dresden’s Royal Palace, targeting the Jewel Room in the Historisches Grüne Gewölbe (Historic Green Vault), museum representatives said in a statement.

More than 100 individual objects were taken. Among them were 11 jeweled items that were some of the Green Vault’s most precious pieces of jewelry; they were crafted between 1782 and 1789, and are valued at up to $1 billion, according to the statement. These include spectacular accessories worn by the queen, such as strands of pearls; diamond collars, pins and pendants; and a large bow-shaped diamond brooch, according to the museum.

On the morning of Dec. 1, curators found a broken window on the ground floor; three exhibit cases were destroyed, and gold jewelry, medals and other artifacts were missing, according to German news agency DW Akademie. The medals included some of the highest honors awarded in Communist East Germany, such as the Order of Karl Marx. The jewelry taken during the heist had been stolen from private citizens by Stasi officials, DW Akademie reported.

Though these objects are nowhere near as valuable as the diamond payload in Dresden, they are rich in historic importance, said Stasi Museum Director Jörg Drieselmann.

“These are not huge treasures,” Drieselmann told the Tagesspiegel. “But we are a history museum and don’t expect people to break in.”

Prior to the Dresden burglary, the biggest diamond theft in recent history was the Antwerp diamond heist in February 2003, known as the “heist of the century,” according to Wired. A ring of Italian criminals broke into a vault in the Antwerp Diamond Center in Belgium, carrying off diamonds, gold and jewelry worth an estimated $100 million. The ringleader, Leonardo Notarbartolo, was captured soon after, but most of the stolen diamonds were never recovered.

An even bigger heist took place in 1990, when two thieves disguised as Boston police officers absconded with an estimated $500 million in artwork from the Isabella Stewart Gardner Museum. The 13 pieces of stolen art included paintings by Degas, Rembrandt and Manet, and the pieces remain missing to this day, museum representatives said in a statement.

Police in Dresden are offering a reward of 500,000 euros for information leading to the capture of the jewel thieves and the return of the stolen objects, according to a statement released Nov. 28.

“We will leave no stone unturned to solve this case,” senior prosecutor Klaus Rövekamp said in the statement. To that end, the Dresden police have released security camera footage of the break-in, sharing the video on YouTube in the hope that it will lead them to the culprits more quickly.

Life after death: Man returned from vast darkness after flat-lining in...