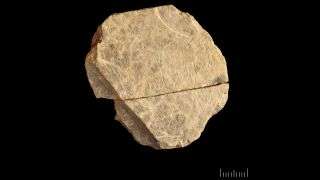 The drawings engraved on the stone plaquettes from the ancient site on the Channel Island of Jersey are thought to be about 15,000 years old, making them the oldest artworks found in Britain.

Britain’s oldest artwork has been unearthed on the Channel Island of Jersey, showing what appear to be Ice Age scenes of mammoths in ancient lands now drowned by the sea.

The drawings are thought to be at least 15,000 years old At that time, a vast land bridge — now known as Doggerland — connected the British Isles to the European continent.

The drawings appear to show mammoths, a bovid animal like a bison or an ox, and a horse — all prey animals for human hunters at the time — as well as abstract patterns. Many of them are overlaid on top of one another.

The images are engraved on 10 fragments of flat stone, known as plaquettes, uncovered at Les Varines, in southeast Jersey, between 2014 and 2018.

The announcement of the discoveries and new research into their origins was published Aug. 19 in the journal PLOS ONE.

The director of the excavations, geoarchaeologist Ed Blinkhorn of University College London, said the site was discovered after fragments of flint were brought up by a farmer ploughing nearby.

Flint isn’t local to Jersey, so archaeologists knew the material must have been carried there from elsewhere, he said.

“We traced this flow of material to its source — a largely intact saddle of land between an ancient sea stack [a coastal rock formation] and a buried granite cliff,” Blinkhorn told Live Science.

Their excavations revealed a number of pits, traces of ochre (a pigmented mineral often used by prehistoric peoples for rituals and body paints), large slabs of granite and several hearths for fires, all protected by a layer of silt and clay, he said.

Most of the stone plaquettes were found near one of the hearths, and three were found under a nearby granite slab.

Plaquettes engraved with drawings have also been found in Portugal, Spain, France, southern Germany and Belgium; and they are attributed to the Magdalenians, an early hunter-gatherer culture that flourished between 23,000 and 14,000 years ago.

“These engraved stone fragments provide exciting and rare evidence of artistic expression at what was the farthest edge of the Magdalenian world,” study co-author Chantal Connoller, an archaeologist at Newcastle University in England, said in a statement.

Stone tools were used to scratch fine lines on the plaquettes, and they appear to have been made by the same person in short succession, Connoller said.

The abstract designs use a combination of straight lines and longer, curved incisions..

One of the drawings shows the body of what may be a bison or ox, overlaid  with the towering form and tusks of a mammoth. A further overlaid drawing  consists of roughly circular lines that may portray a human face.

But the drawings would have quickly faded — incising the stones created a powder in the lines that would have been only visible for a short time after they were made, Connoller said. “The act or moment of engraving was more meaningful than the object itself.”

The island of Jersey, just 9 miles (14 kilometers) wide, is much too small to support large animals, so any mammoths or herds of bison and horses must have been seen in lands now covered by the ocean.

The Doggerland land bridge that once connected the British Isles to the European continent sank beneath rising sea waters after the end of the last Ice Age, about 8,000 years ago.

It was warm and dry, however, for thousands of years before that, and scientists think the land was covered with forests and densely populated by animals, including small groups of early humans.

Several ancient human bones and Stone Age artifacts have been dredged or fished up from the sunken lands, especially in the shallow area of the English Channel known as Dogger Bank, which gives the region its name.

The researchers think the site at Les Varines was a temporary encampment used by a Magdalenian group who lived there only as long as the weather and hunting stayed good.

But the deliberate decoration of the stone fragments hints at more permanent settlements, Conneller said.

“The engraved stones are firmly domestic art,” she said. “The people at Les Varines are likely to have been pioneer colonisers of the region, and creating engraved objects at new settlements may have been a way of creating symbolic relationships with new places.”

Out of body experience: Woman leaves body in near death experience...

End of the world: Bible’s ‘hidden’ 2021 doomsday prophecy exposed after...