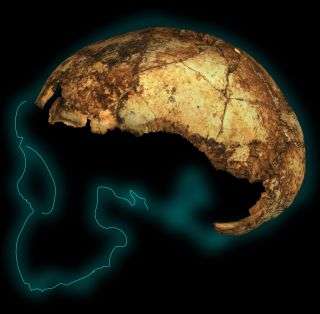 In an ancient cave in South Africa, paleontologists have found evidence that three of humankind’s oldest known relatives lived in the same place, at the same time.

That time was roughly 2 million years ago, and the place was the Drimolen Paleocave System near Johannesburg — part of a 180-square-mile (466 square kilometers) network of limestone caverns also known as the Cradle of Humankind.

As their nickname suggests, the primeval caves hold some of the oldest-known fossils of archaic humans. Scientists have unearthed more than 900 hominin fossils at the site, including a near-complete skeleton of a 3 million-year-old — a human ancestor that lived between 3.3 million and 2 million years ago — and the only extant fossils of , an ancestor not directly related to modern humans that lived roughly 2 million to 1.2 million years ago.

Now, a new study suggests, researchers digging in the caverns have found the oldest skull fragment ever found, dating to some 2 million years ago — several hundred thousand years older than any other known fossil.

“The age of the fossil shows that existed 150,000 to 200,000 years earlier than previously thought,” lead study author Andy Herries, head of the Department of Archaeology and History at La Trobe University in Australia, said in a statement. “We can now say shared the landscape with… and .”

is considered to be a direct ancestor of modern humans (), thriving for nearly 2 million years before vanishing roughly 110,000 years ago, the researchers wrote. They are the first species on our family tree to have human-like proportions (their name means “upright man”) and the first to appear outside of Africa, a 2013 study in the journal Science suggests. Before now, the earliest fossils came from the country of Georgia; the species was hypothesized to have migrated out of Africa around 1.85 million years ago.

In the new study, published April 3 in the journal Science, researchers analyzed several fossils excavated from Drimolen cave between 2015 and 2018. Among the fossils is a skull fragment believed to belong to a child, who was 2 or 3 years old at the time of death.

To date the fossil, the team first looked to the ancient sediments that surrounded the fossil. The orientation of magnetic particles located in the cave’s rocks suggested that the fossils were deposited during a brief window when Earth’s magnetic poles reversed — a rare geophysical event that tends to occur a few times every million years or so.

Prior studies of Earth’s magnetic field had revealed that one such magnetic reversal occurred 1.95 million years ago. To determine if that reversal was the one that affected the cave’s magnetic minerals, the team looked at the ratio of chemical elements in the sediments near the fossil. Because radioactive versions, or isotopes, of uranium atoms decay into lead at a constant rate, the ratio of uranium isotopes to lead in the sample confirmed the minerals were 1.95 million years old.  The cranial fossil, they concluded, was even older than this, and dated to approximately 2 million years ago.

Because fossil remains of and found at Drimolen date to the same time period, this research suggests the three archaic hominins all lived side-by-side in southern Africa at the same time — albeit briefly. This era would have been a moment of transition, the researchers wrote, right before went extinct and was just beginning its nearly 2 million-year residency on Earth. Indeed, the authors concluded, it could be that fierce competition with and finally led to the demise of — a possibility never seriously considered until now.