Home History Did Da Vinci and Rembrandt’s Creative Genius Lie in The Way They... 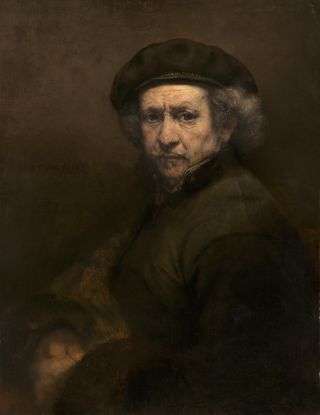 Famous painters da Vinci and Rembrandt, though from different centuries, had one oddity in common: The way the artists saw themselves in the mirror was likely a bit different than how others saw them, according to new findings.

The Renaissance polymath Leonardo da Vinci and the 17th-century Dutch painter Rembrandt Harmenszoon van Rijn painted themselves in a peculiar way — with one eye turned outward. That has led a number of scholars to suggest that these famous painters actually had crossed eyes, a medical condition called “strabismus.” These scholars suggested that the painters had a specific type of strabismus called “exotropia” in which one or both of the eyes are turned outward.

But no historical documents seem to exist that link the painters to such a medical condition. Now, a new study suggests that the two painters didn’t actually have an outward-looking eye, but rather, they both had one dominant eye that led them to perceive themselves in the mirror as if having an outward-looking eye.

“When looking at one’s own eyes in a mirror, an individual can look at only one eye at a time,” the researchers wrote in their new study published today (Nov. 26) in the journal JAMA Ophthalmology.

The eye you focus on in the mirror sees its own reflection looking straight back; but the other eye, viewing the first eye at an angle, sees that first eye as if it’s turned outward.

Most people’s brains naturally learn to favor the image of the eye that looks straight back at the individual and to ignore the misalignment seen by the other eye. But some people — those who have a dominant eye — see themselves from the point of view of their dominant eye.

“A strongly dominant right eye sees the reflected image of the left eye as being turned out when in fact no true turn out exists and vice versa for a strongly dominant left eye,” the researchers wrote in the study.

What’s more, the degree of exotropia typically increases as a person ages, but the misalignment seen in Rembrandt’s self-portraits didn’t increase over time, according to the researchers. “Strong eye dominance is a more plausible alternative than constant misalignment to explain the apparent exotropia in Rembrandt’s self-portraits,” the researchers wrote.

But not everyone is convinced by this argument. “Yes, eye dominance can result in a SLIGHT deviation from apparent alignment, but not nearly as significant as the deviation Rembrandt shows himself as having,” Margaret Livingstone, a professor of neurobiology at Harvard Medical School who was not a part of the study, wrote in an email to Live Science. “Just look at their examples and then at any Rembrandt self-portrait you can find.”

In a previous study, Livingstone and her colleague analyzed 36 self-portraits by Rembrandt and found that he painted one of his eyes looking outward in all but one. They concluded that he must have had exotropia. Yet, another researcher previously analyzed six artworks from da Vinci and others thought to have used da Vinci as a model and concluded that he also must have had exotropia.

Christopher Tyler, a professor in the City University of London’s Division of Optometry and Visual Sciences in the United Kingdom and author of that study agrees that the evidence still points to exotropia rather than a dominant eye.

“It is a clever idea, but quantitatively to make it work they are proposing that the artist sat 6.5 inches away from the mirror they used to view themselves in,” Tyler told Live Science in an email. “This might work for a head shot, but is obviously not the case for most of Rembrandt’s half-length portraits, or for Leonardo’s Vitruvian Man of Salvator Mundi.”

What’s more, four of the works Tyler analyzed in his study were sculptures of da Vinci created by others. Yet, the sculptures also had one eye looking off to the side which the authors interpreted as an “artistic device” to show that the sculpture is looking back at a person when viewed from various directions, Tyler said. “To make this case, they would have to show that  this was widely used among sculptures, but my research suggests that it was not at all common in sculpture of the time.”

So whether or not these famous painters actually saw the world differently or saw themselves differently remains as unclear as a foggy mirror.

Capitalism is turning us into addicts

MH370 news: How pilot’s ally was sent to prison hours before...