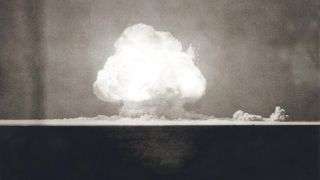 A mushroom cloud rises from the first atomic explosion, detonated on July 16, 1945 in Alamogordo, New Mexico.

Three American spies were long known for having stolen U.S. atomic secrets between 1940 and 1948, sharing that information with the Soviets. Their actions fast-tracked the U.S.S.R’s development of nuclear weapons and set the stage for the Cold War.

But in fact, there was a fourth spy — code-name “Godsend” — who handed over atomic secrets to Soviet intelligence. This person’s identity was concealed from public view until now.

His real name was Oscar Seborer, and he worked at the Los Alamos National Laboratory in New Mexico, home of the Manhattan Project where the first nuclear weapons were designed. For decades, Seborer’s name languished in relative obscurity, mentioned in a few dozen pages amid tens of thousands of secret documents compiled by the FBI.

But once these files were declassified in 2011, they came to the attention of two historians, John Earl Haynes and Harvey Klehr; 70 years after Seborer betrayed his country, his story is finally being told, The New York Times recently reported.

Klehr, formerly at the Library of Congress, and Haynes, an emeritus professor at Emory University in Georgia, previously collaborated on books about communism and Soviet-era spying, such as “Venona: Decoding Soviet Espionage in America” (1999) and “Spies: The Rise and Fall of the KGB in America” (2010), both released by Yale University Press.

Before this discovery, the three spies known for bringing atomic secrets to the Soviets from Los Alamos were David Greenglass, Klaus Fuchs and Theodore Hall. A fourth spy was proposed in the early 1990s based on clues in KGB officers’ memoirs, but those clues were found in 1995 to be part of a Russian misinformation campaign to protect another active agent, Klehr and Haynes wrote in a new study. They published their findings online in the latest issue of the CIA journal Studies in Intelligence.

The researchers named Seborer as the fourth Los Alamos spy, based on the 2011 declassified FBI documents, as well as partial records from a decades-long initiative called Operation SOLO. The operation, which ran from 1952 to 1980, centered on two brothers in the U.S. Communist Party who were FBI informants. To date, only the SOLO files up to 1956 have been released, and many open questions remain about Seborer’s activities as a spy and what happened to him after he later defected to the U.S.S.R., the researchers wrote.

Mentions of Seborer were scant and “easily overlooked” in the vast mountain of files, Klehr and Haynes said. Nevertheless, they learned that his family — Jewish immigrants from Poland — was “part of a network of people connected to Soviet intelligence,” and some were known members of the Communist Party.

Seborer trained as an engineer and enrolled in the U.S. Army in 1942; he transferred to Los Alamos in 1944 and was assigned to the Manhattan Project for two years, according to the journal article. After the war, he worked as an electrical engineer for the U.S. Navy, but signs began to surface that all was not well. His superior officers repeatedly reported Seborer as a “security risk,” but this seemingly arose from his associations with known Communists rather than suspicions of spying, according to the study.

By the beginning of the 1950s, anti-Communist fervor in the U.S. was reaching a new high, and Seborer secretly fled the country in 1952 with his brother, sister-in-law and mother-in-law. He eventually settled in Moscow, where he died in 2015.

Conversations from SOLO files hint — albeit cryptically — that Seborer may have been up to something while at Los Alamos. “Oscar was in New Mexico — you know what I mean,” Communist Party member and lawyer Isidore Needleman told one of the informants. “I won’t draw you a diagram,” he added, as Haynes and Klehr noted in their paper.

Needleman went on to hint more openly that Seborer was a spy, even writing a note for the informant that read: “He [Seborer] handed over to them [the Soviets] the formula for the ‘A’ bomb,” the researchers reported.

KGB archives made public in 2009 introduce still more clues pointing to Seborer as a fourth atomic-era spy. Notes describe an operative at Los Alamos, identified as “Godsend,” handing over atomic secrets but then leaving to take another job, as Seborer did. What’s more, Godsend wasn’t alone; he was part of a “family.” Other code-names — “Godfather,” “Relative” and “Nata” — refer to Godsend’s two brothers and a sister, respectively, the researchers wrote. This group likely represents Seborer and his siblings, who were known for their Communist activities and ties to Soviet intelligence, according to the study.

As for the specific atomic secrets that Seborer may have shared — and whether or not his family members played a direct role in the espionage — the study authors are still piecing together those elusive details.

“While we know a great deal about the information Fuchs, Hall and Greenglass had access to — and some of the specifics of exactly what they provided the Soviets — we only know that Seborer provided something,” they wrote in the study.

For now at least, the significance of Seborer’s contributions to Soviet intelligence remain unknown. Though it may be worth noting that one of the attendees at his funeral was a representative of Russia’s Federal Security Service — the espionage agency that replaced the KGB, the researchers reported.

Dear attorney general: Pepper spray is a chemical irritant. So are...

As a magnet pulls strength: several magnetic storms are predicted in...