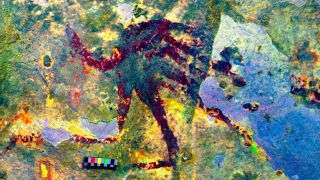 This therianthrope, showing a human figure with a tail, is part of the hunting scene found in cave art in Leang Bulu’ Sipong in Indonesia.

Researchers discovered cave paintings depicting what may be part-animal, part-human figures — decked out with animal snouts — hunting wild pigs and dwarf buffaloes in Indonesia. These may be the oldest known examples of rock art, a new study finds.

The 44,000-year-old artwork may also be the oldest evidence for the human ability to imagine the existence of supernatural beings, scientists added.

The ancient painting was discovered in the limestone cave of Leang Bulu’ Sipong 4 in the Indonesian island of Sulawesi in 2017. During a survey for rock art, study co-author Pak Hamrullah noticed “what appeared to be the entrance to a cave located high up in a limestone cliff face, and he climbed several meters up a fig tree vine to investigate it,” study co-author Adam Brumm, an archaeologist at Griffith University in Brisbane, Australia, told Live Science.

“Anoas are small in size, but they are reportedly very fierce, especially when cornered,” Brumm said. “From what I have heard from local people, these elusive dwarf bovids have been known to seriously gore and even kill unwary hunters on the island. Indeed, the reputation of anoas is such that the Indonesian army even named their armored personnel carrier, the Anoa, after these creatures.”

By analyzing levels of uranium and other radioactive isotopes in mineral growths known as “cave popcorn” that had formed on the rock art since it was created, the researchers estimated that the cave paintings were at least 43,900 years old.

“Our dating work shows that this is the world’s oldest dated figurative artwork, an image that resembles the subject matter it is intended to represent,” Brumm said. Until now, the oldest known dated example of figurative art was a red disk from the rock art site of El Castillo in Spain, which is about 40,800 years old.

The simplified, highly stylized pictures of the hunters portrayed them with the muzzles, beaks and snouts of birds, reptiles and other animals native to Sulawesi, as well as tails and other bestial traits. These images were therianthropes — part-human, part-animal figures — which occur in the stories of nearly every modern society and are thought of as gods, spirits or ancestral beings in many religions worldwide.

“In Europe, scholars have long been interested in the oldest known images of therianthropes in prehistoric art, because they are generally accepted to represent the earliest evidence for our ability to conceive of abstract entities that do not exist in the natural world,” Brumm said. “Depictions of therianthropes are also seen as an indication of early spirituality or religious-like thinking.”

These images of therianthropes may be “the oldest evidence for our ability to imagine the existence of supernatural beings, a cornerstone of religious experience.” Until now, the oldest known depiction of a therianthrope was a carved figurine of a human with a feline head, from Germany, that dated back about 40,000 years.

All in all, the newfound cave painting depicts a hunting scene. This means the artwork is also the earliest known visual example of human storytelling; until now, the earliest known examples of such scenes in the vast record of prehistoric cave art worldwide dated to about 14,000 to 21,000 years ago, the researchers said.

The origins of rock art

Previous research suggested that humanity’s first rock art appeared in Europe and consisted of abstract symbols. By 35,000 years ago, prior work had suggested that early artists graduated to more sophisticated figurative portrayals of horses and other animals. Scenes that depicted multiple interacting subjects were not thought to have developed until about 20,000 years ago.

“The cave painting from Leang Bulu’ Sipong 4 suggests that there was no gradual evolution of Paleolithic art from simple to complex around 35,000 years ago — at least, not in Southeast Asia,” study co-author Maxime Aubert, at Griffith University in Brisbane, Australia, said in a statement. “All of the major components of a highly advanced artistic culture were present in Sulawesi by 44,000 years ago, including figurative art, scenes and therianthropes.”

The scientists noted that they had uncovered hundreds of cave sites with paintings in the Maros-Pangkep limestone karst region of Sulawesi whose ages they had yet to date. For example, in 2014, they found that a limestone cave in this area harbored one of the world’s oldest rock-art motifs, a sprayed, red outline of a human hand created at least 40,000 years ago. Similarly, in 2018, researchers discovered a figurative painting of a wild bovine dating to at least 40,000 years ago on the Indonesian island of Borneo. This find suggested that Indonesia may be a key place for researching the beginnings of cave art and the evolution of human thought, the scientists noted.

Unfortunately, at nearly every location they investigated, the researchers have also found that these paintings are flaking away. That includes the site in the new study.

“We need funding to work with our Indonesian colleagues to figure out why this deeply ancient and globally significant art is exfoliating so quickly at almost every site and what to do about it,” Brumm said.

The scientists detailed their findings in the Dec. 12 issue of the journal Nature.

Charles Q. Choi is a contributing writer for Live Science and Space.com. He covers all things human origins and astronomy as well as physics, animals and general science topics. Charles has a Master of Arts degree from the University of Missouri-Columbia, School of Journalism and a Bachelor of Arts degree from the University of South Florida. Charles has visited every continent on Earth, drinking rancid yak butter tea in Lhasa, snorkeling with sea lions in the Galapagos and even climbing an iceberg in Antarctica.