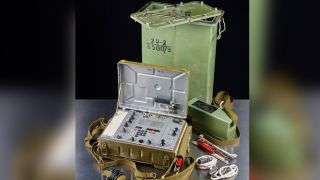 The Soviet spy radio was found buried beside a path through a former forest near the German city of Cologne, a few miles from a nuclear research center and a military airbase.

Archaeologists digging for the remains of a Roman villa near the German city of Cologne have found a sophisticated Soviet spy radio that was buried there shortly before the fall of the Iron Curtain.

The spy radio was buried inside a large metal box that was hermetically sealed with a rubber ring and metal screws. Although the radio’s batteries had run down after almost 30 years in the ground, the box hissed with inrushing air when it was opened.

“Everything in the box was carefully encased in wrapping paper — it is a factory-fresh radio,” said archaeologist Erich Classen from the Rhineland Regional Association (LVR).

The buried box and the hidden radio were found in August 2019 by a team of archaeologists digging near what was once a path through the Hambach Forest, about 20 miles (30 kilometers) west of Cologne, in an area earmarked for an open-cast lignite mine and now cleared of trees.

They expected to find fragments from a Roman-age settlement thought to have been built in the area, and so they were surprised when they instead unearthed a pit and the metal box.

“We think the radio will work if a new battery is available, but we didn’t try,” Classen said. “Restoration work was not necessary.”

The radio has been identified as a model R-394KM transmitter and receiver — code-named “Strizh,” meaning “Swift” — that was manufactured in the Soviet Union in 1987. It was carried by agents into Western Europe shortly after that, and only a few years before the fall between 1989 and 1991 of the “Iron Curtain” of communism that divided Eastern and Western Europe.

The scientists suspect agents would have used the spy radio to send secret reports back to the Soviet Union about observation of the Jülich Nuclear Research Centre, about 6 miles (10 km) west of where it was found; or of the military air base at Nörvenich, about the same distance to the southeast, where U.S. Pershing nuclear missiles were based until 1995.

It’s possible that “Stasi,” or State Security Service agents from the Soviet-controlled German Democratic Republic in the east of the country buried the spy radio in West Germany for future use, Classen said.

It may also have been a back-up in case a spy’s other radios were damaged or seized.

The high-frequency or shortwave radio was capable of transmitting and receiving messages as far as 750 miles (1,200 km) — far enough to reach Warsaw in Poland, which was then part of the Soviet bloc.

But the pristine condition of the buried radio suggests that it was never used, and it was probably forgotten and left in the ground soon after the fall of the Iron Curtain, Classen said.

Some features of the Soviet spy radio hint at who might have used it.

Unlike most other radios of the same model, which are labeled in Russian using the Cyrillic alphabet, the controls of the radio found in the Hambach Forest area are labeled in English and the Roman alphabet.

That suggests it was designed to be used by a German or an English speaker, rather than a Russian; but it may also have been a form of camouflage, to hide the true origins of the radio in the Soviet Union.

The paper wrapped around the radio, however, had sequences of numbers in Russian handwriting, giving positions of the dials on the radio that could be used — similar number sequences have been found on Soviet checklists, Classen said.

It’s unlikely that further details of the mystery of the Hambach Forest spy radio will be found, given that it’s been so long since it was buried. But the spy radio itself is now part of the LVR’s collection, and it is on display at the LVR-Landes Museum in Bonn until March 29, Classen said.

Some of the ancient artifacts from the same dig are also on display in the museum, but archaeologists haven’t yet determined exactly how old they are, he said.