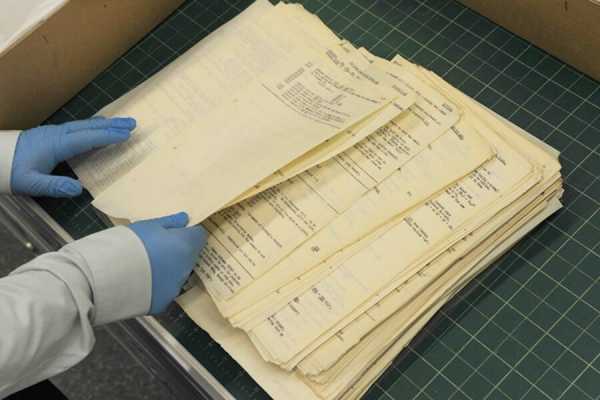 The transmissions were released to mark the 75th anniversary of the Allies’ victory in Europe.

GCHQTranscripts of the Nazi messages are being digitized by the Bletchley Park Trust.

As Allied troops drew nearer, on May 7, 1945, a Nazi military radio network sent out its final message before the war’s end: &#8220;Closing down for ever — all the best — goodbye.” The next day, the Allies declared victory against the surrendered Germans.

That message was among the last wartime correspondences exchanged between Nazi military posts at the end of World War II, many of which were successfully intercepted by British intelligence.

According to the BBC, the last Nazi messages decoded by Britain’s Special Intelligence Service (SIS) were released as a tribute to mark the 75th anniversary of Victory in Europe Day, commonly referred to as VE Day.

During the Second World War, the codebreakers unit under the British Secret Service — otherwise known as MI6 — was headquartered at Bletchley Park. There, British officers worked day and night intercepting, collecting, and translating messages exchanged by the Nazis.

Most notably, the codebreakers at Bletchley successfully cracked the infamous Nazi Enigma code, a feat that prevented countless more deaths during the war. 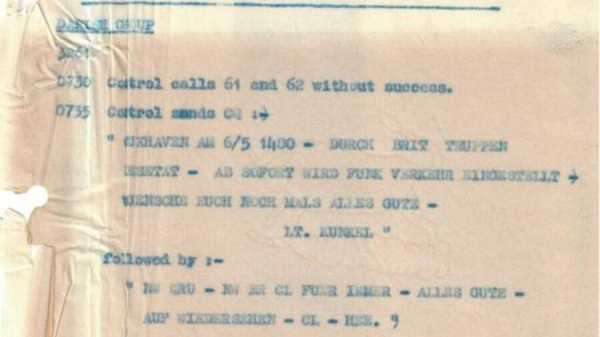 In 1944, the German military radio network, codenamed BROWN, had connections that transferred all across Europe, sending out military reports on the development of experimental weapons.

Among the last messages sent out by the Nazi network were from a Lieutenant Kunkel as he signed off from his station in Cuxhaven on Germany’s North Sea coast.

“British troops entered Cuxhaven at 1400 on 6 May. From now on all radio traffic will cease — wishing you all the best,” the message from Kunkel read. The message was immediately followed by another which read: “Closing down for ever — all the best — goodbye.”

That final message sent at approximately 7:35 a.m. was the last Nazi coding intercepted by the British before Germany’s surrender. Another Nazi message that was intercepted earlier relayed an exchange between stations regarding a search for spare cigarettes.

By the spring of 1945, almost 9,000 people were working at Bletchley Park, the vast majority of them women. Bletchley Park continued operations long after the end of the war to monitor for possible Nazi resurgence and decode Japanese military cyphers.

Once one of the most secretive intelligence bases in the world, Bletchley Park now serves as a public museum housing a wealth of historic artifacts from the war.

“These transcripts give us a small insight into the real people behind the machinery of war,” said Tony Comer, a historian at Government Communications Headquarters (GCHQ), the intelligence organization that succeeded Bletchley Park. 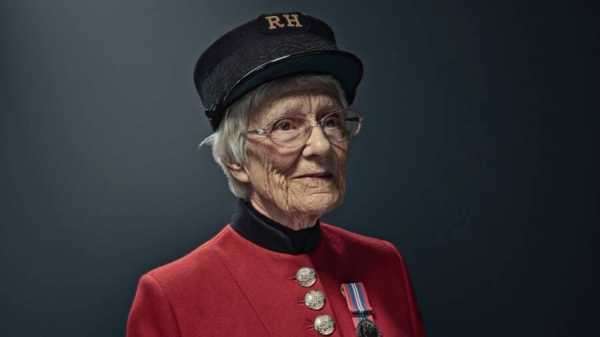 Comer added: “While most of the UK was preparing to celebrate the war ending, and the last of the German military communicators surrendered, Bletchley staff — like today’s GCHQ workers — carried on working to help keep the country safe.”

Among the officers who worked at Bletchley Park was Helen Andrews, who began her work with British intelligence at the age of 17. Andrews still remembered the celebratory atmosphere during VE Day — nearly 80 years since — as if it were yesterday.

“A bloke came into the room where we were working and said: ‘It’s all over. They’ve surrendered,’” she recalled. Celebrations over the victory immediately ensued. Andrews, along with other co-workers, hitched a ride to London where they ended up at Trafalgar Square.

People on the streets were joyous as they sang, drank, and jumped in the fountains. Later, Andrews celebrated at a tea party with friends as they danced.

Even decades later, Andrews remembered how she felt that fateful day, describing her emotions back then as a mixture of deep relief and exhaustion. She returned to work at Bletchley Park the next day.

The last of the Nazi codes intercepted by British intelligence are currently being digitized and will soon be made available for the public.

Now that you’ve read about the last Nazi transmission intercepted by the British, learn about secret agent Dusko Popov, the man who allegedly inspired the story of James Bond, and examine these 21 vile Nazi propaganda posters from the war.