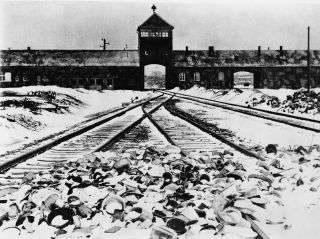 Train tracks converge at the entrance to the Nazi death camp, Auschwitz-Birkenau. In this photo, taken in 1945, the tracks are strewn with snow-covered personal effects that belonged to the camp’s inmates.

In the spring of 1944, Allied forces received disturbing intelligence about horrific atrocities taking place at Auschwitz-Birkenau in southern Poland, a place now known as one of the Nazis’ most brutal extermination camps.

Two escaped Jewish prisoners revealed first-hand knowledge of the horrors they experienced, and the Allies faced a terrible choice at a pivotal moment during the war, when their military resources were already strained to the breaking point.

Should they deploy aircraft to bomb the death camp, despite a substantial risk of killing trapped prisoners? Or were the military cost and potential loss of life too great, when the outcome of World War II itself hung in the balance? In a new PBS documentary, “Secrets of the Dead: Bombing Auschwitz,” historians probe the deliberations of Allied leaders: Should they perform a moral but militarily fruitless action, or concentrate their might on crushing the Nazi war machine for good?

Established in 1940 near the town of Oświęcim, Poland, as a concentration camp for Polish political prisoners, Auschwitz’s inmate numbers skyrocketed as the war progressed. In August 1944, Auschwitz held around 400,000 people: 205,000 were Jews and 195,000 were non-Jews — Poles, Soviet POWs, Roma and other ethnic groups, according to the Auschwitz-Birkenau Memorial and Museum. (By the war’s end an estimated 1.1 million people had died there.)

When Rudolf Vrba and Alfred Wetzler escaped Auschwitz in April 1944, they brought with them the first eyewitness testimony describing gas chambers and the Nazis’ use of mass murder at an unthinkable scale. Their detailed account to Slovakia’s Jewish underground, first known as the Vrba-Wetzler report, was later distributed as The Auschwitz Protocol, according to PBS.

From May through July of 1944, copies of the report were sent to neutral Switzerland’s War Refugee Board; to the War Refugee Board headquarters in Washington, D.C.; and to leaders of the Allied forces, including the American assistant secretary of war, John McCloy. Winston Churchill, the British prime minister, was so troubled by the report that he issued a memo recommending a bombing raid on the death camp.

But ultimately, no bombers were sent to Auschwitz. Though Allied raids were already targeting the German chemical plant IG Farben, which was located just 4 miles (6 kilometers) from the death camp and even used Auschwitz prisoners for labor, several factors led the Allies to reject Auschwitz as a potential target, said Tami Davis Biddle, a professor of history and national security strategy at the U.S. Army War College in Carlisle, Pennsylvania.

One reason can be traced to widespread anti-Semitism in the U.S. and the U.K. during WWII, fanned by a highly effective Nazi propaganda campaign suggesting that Jews were manipulating the Allied war machine, Biddle told Live Science.

“Politicians got nervous if it looked like they were making special efforts on behalf of the Jews,” Biddle said. In fact, many figures in American leadership — Jewish and non-Jewish alike — agreed at the time that maintaining public support of the war effort required downplaying emphasis on Jewish interests, said Michael Berenbaum, a professor of Jewish studies at American Jewish University in Los Angeles.

“There was a fear that Americans would support the war effort less if they thought it was war about the Jews,” Berenbaum told Live Science.

There was also the question of how accurately Auschwitz could be bombed from the air. Allied military officers had some aerial photos of the camp, and the Auschwitz Protocol provided more intel about the buildings, so bombers could pick targets that would cause fewer casualties. But aerial bombing during WWII was notoriously inaccurate; so-called precision bombing, as we know it today, was impossible, and a raid could have killed far more prisoners than it saved, Biddle said.

“You would need to drop 220 bombs on each of the four crematoria at Auschwitz-Birkenau to have a 90% chance of one of them hitting each crematorium,” Biddle said.

What’s more, assigning bombers to an Auschwitz raid would divert military resources away from the front lines, Biddle said.

“We look back on World War II and we tend to think, well, it was probably obvious that we were going to win. It wasn’t,” Biddle said. The window in 1944 in which it was possible to strike at Auschwitz was also one of the most intense periods of fighting on the European continent; Allied forces were scrambling to move armies eastward, shut down German rocket-launching sites and prevent a resurgence of the Luftwaffe — the German air force.

“The military was very jealous of its resources. It’s pretty much fighting for its life in 1944,” Biddle said. “On the one hand, there’s the case for diverting resources to go hit this target. On the other hand, there’s this sense that we’ve just got to defeat the Germans no matter what, and focus everything on the military defeat.”

Even if the Allies had bombed Auschwitz, it wouldn’t have been a “magic bullet” that saved millions of lives, Berenbaum said. By the time the Allies had what they needed to proceed with a raid, it would have been too late for most of the Holocaust’s 11 million victims. Most of the death camps had already been shut down by the retreating Nazis; at that point, about 90% of the people murdered by the Third Reich had already been killed, Berenbaum said.

Nevertheless, there’s no denying that bombing Auschwitz would have sent a resounding message that such terrible atrocities would not go unanswered.

“I wish we had done it,” Biddle said. “I wish that we could look back on our record of the war and say, we understood how awful this was, and we want to make a moral statement.”

“Secrets of the Dead: Bombing Auschwitz” premieres Jan. 21 at 9 p.m. on PBS (check local listings), pbs.org/secrets and the PBS Video app to commemorate International Holocaust Remembrance Day and the 75th anniversary of the liberation of Auschwitz.

ISS news: Three anomalies spotted by NASA revealed – ‘Unlike anything...