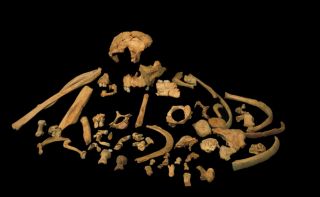 In 1994, archaeologists digging in the Atapuerca Mountains in northern Spain discovered the fossilized remains of an archaic group of humans unlike any other ever seen. The bones were cut and fractured, and appeared to have been cannibalized. The largest skeletal fragments — which came from at least six individuals and dated to at least 800,000 years ago — shared some similarities with modern humans (), plus other now-extinct human relatives like Neanderthals and Denisovans, but were just different enough to defy classification as any known species.

Researchers ultimately named the previously unknown hominins , borrowing the Latin word for “predecessor.” Because the bones were among the oldest fossils ever found in Europe, some researchers speculated that may have been the elusive common ancestor of Neanderthals, Denisovans and modern humans. Now, a new study of DNA the single oldest sample of human genetic material ever analyzed — argues that that’s probably not the case.

In the study, published April 1 in the journal Nature, researchers sequenced the ancient proteins in the enamel of an 800,000-year-old tooth, using the proteins to decipher the portion of genetic code that created them. After comparing that code with genetic data from more recent human tooth samples, the team concluded that DNA was too different to fit on the same branch of the evolutionary tree as humans, Neanderthals and Denisovans.

Rather, the team wrote, was probably a “sister species” of the shared ancestor that led to the evolution of modern humans and our extinct hominin cousins.

“I am happy that the protein study provides evidence that the  species may be closely related to the last common ancestor of , Neanderthals, and Denisovans,” study co-author José María Bermúdez de Castro, scientific co-director of the excavations in Atapuerca, said in a statement. “The features shared by  with these hominins clearly appeared much earlier than previously thought.”

To reach these results, the researchers used a method called paleoproteomics — literally, the study of ancient proteins. Using mass spectrometry, which displays the masses of all the molecules in a sample, scientists can identify the specific proteins in a given fossil. Our cells build proteins according to instructions contained in our DNA, with three nucleotides, or letters, in a string of DNA coding for a specific amino acid. Strings of amino acids form a protein. So, the amino acid chains that form each person’s unique protein sequence reveal the patterns of nucleotides that form that person’s genetic code, lead study author Frido Welker, a molecular anthropologist at the University of Copenhagen, told Haaretz.com.

Studying ancient proteins therefore opens a window into our genetic past in a way that DNA analysis cannot. DNA degrades relatively quickly, becoming unreadable within several hundred thousand years. To date, the oldest human DNA ever sequenced was about 430,000 years old (also discovered in Spain), according to a 2016 Nature study. Proteins, meanwhile, can survive in fossils for millions of years. Scientists have previously used similar protein sequencing methods to study the genetic code of a 1.77-million-year-old rhino found in Dmanisi, Georgia, and a 1.9-million-year-old extinct ape in China.

While protein analysis allows researchers to look much further into the past than other genetic-sequencing methods, the findings are still limited by the quality and number of specimens available to study. Because the present research is based only on a single tooth from a single individual, the results provide only a “best guess” as to where the species lands on the human evolutionary tree, the authors wrote. Different types of cells produce many different kinds of proteins, so this enamel proteome is far from a complete genetic profile. More fossil evidence is needed to flesh out these results.

Of course, the quality of those fossil samples matters, too. As part of this study, the researchers also examined a 1.77-million-year-old molar taken from a fossil (an ancient human ancestor that lived 2 million years ago) previously discovered in Georgia; however, the protein sequence was too short and damaged to offer any new insights about the specimen’s DNA. Our human family tree will have to remain, for now, a tangled messy bush.