Home Planet Earth A Baby Volcano Was Just Discovered in the Pacific, and It’s Adorable 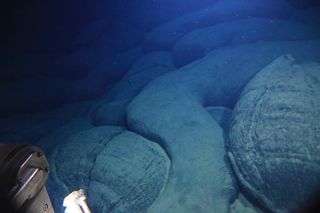 Researchers have discovered a volcano under the sea near Minamitorishima Island, Japan.

There’s no cause for alarm — the volcano last erupted 3 million years ago. That’s a long time for humans, but it makes the newly discovered seamount a virtual toddler compared to the volcanoes around it, most of which have been quiet for between 70 million and 140 million years.

What’s exciting about the newfound volcano is that it’s what’s known as a petit-spot volcano. These are relatively small volcanoes that form in fissures created by the bending of tectonic plates. Imagine two plates, like pancakes, one diving under another (a process called subduction). As one plate pushes under the other, it flexes under the pressure. As a result, cracks form. When magma squeezes up to the seafloor through one of these cracks, it forms a petit-spot volcano.

The first petit-spot volcano to be spotted wasn’t discovered until 2006, when Japanese scientists found one northeast of Japan near the Japan Trench, an area of active subduction. (Subduction on the Japan Trench caused the devastating 2011 Tohoku earthquake and subsequent tsunami in Japan.)

The newfound volcano sits on the Pacific plate, where the plate is subducting into the depths of the Mariana Trench, according to new research published this month in the journal Deep-Sea Research Part I. The volcano is only about 1,500 feet (450 meters) tall, the researchers reported, and sits under more than 16,400 feet (5,000 m) of water. Using a crewed submersible called Shinkai 6500, which is capable of diving 21,325 feet (6,500 m) beneath the ocean surface, researchers were able to collect rock samples from the newfound volcano.

The samples revealed when the volcano last erupted. The fairly recent eruption is in contrast to its surroundings, as the volcano sits on a part of the Pacific plate that has been relatively peaceful for tens of millions of years. Earlier research suggested that the little volcano could provide a window into the upper layer of the mantle, known as the asthenosphere, because magma from petit-spot volcanoes appears to originate in this layer. That’s promising, said lead researcher Naoto Hirano, of Tohoku University, because the asthenosphere is the immediate driver of the movement of tectonic plates.

“This will tell us more about the true nature of the asthenosphere,” Hirano said in a statement.