Home Science and Technology The ‘Three-Body Problem’ Has Perplexed Astronomers Since Newton Formulated It. A.I. Just... 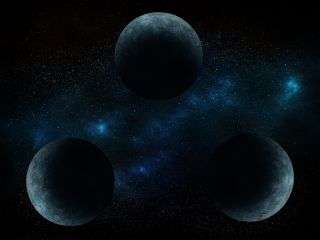 The mind-bending calculations required to predict how three heavenly bodies orbit each other have baffled physicists since the time of Sir Isaac Newton. Now artificial intelligence (A.I.) has shown that it can solve the problem in a fraction of the time required by previous approaches.

Newton was the first to formulate the problem in the 17th century, but finding a simple way to solve it has proved incredibly difficult. The gravitational interactions between three celestial objects like planets, stars and moons result in a chaotic system — one that is complex and highly sensitive to the starting positions of each body.

Current approaches to solving these problems involve using software that can take weeks or even months to complete calculations. So researchers decided to see if a neural network — a type of pattern recognizing A.I. that loosely mimics how the brain works — could do better.

The algorithm they built provided accurate solutions up to 100 million times faster than the most advanced software program, known as Brutus. That could prove invaluable to astronomers trying to understand things like the behavior of star clusters and the broader evolution of the universe, said Chris Foley, a biostatistician at the University of Cambridge and co-author of a paper to the arXiv database, which has yet to be peer-reviewed.

“This neural net, if it does a good job, should be able to provide us with solutions in an unprecedented time frame,” he told Live Science. “So we can start to think about making progress with much deeper questions, like how gravitational waves form.”

Neural networks must be trained by being fed data before they can make predictions. So the researchers had to generate 9,900 simplified three-body scenarios using Brutus, the current leader when it comes to solving three-body problems.

They then tested how well the neural net could predict the evolution of 5,000 unseen scenarios, and found its results closely matched those of Brutus. However, the A.I.-based program solved the problems in an average of just a fraction of a second, compared with nearly 2 minutes.

The reason programs like Brutus are so slow is that they solve the problem by brute force, said Foley, carrying out calculations for each tiny step of the celestial bodies’ trajectories. The neural net, on the other hand, simply looks at the movements those calculations produce and deduces a pattern that can help predict how future scenarios will play out.

That presents a problem for scaling the system up, though, Foley said. The current algorithm is a proof-of-concept and learned from simplified scenarios, but training on more complex ones or even increasing the number of bodies involved to four of five first requires you to generate the data on Brutus, which can be extremely time-consuming and expensive.

“There’s an interplay between our ability to train a fantastically performing neural network and our ability to actually derive data with which to train it,” he said. “So there’s a bottleneck there.”

One way around that problem would be for researchers to create a common repository of data produced using programs like Brutus. But first that would require the creation of standard protocols to ensure the data was all of a consistent standard and format, Foley said.

There are still a few issues to work through with the neural net as well, Foley said. It can run for only a set time, but it’s not possible to know in advance how long a particular scenario will take to complete, so the algorithm can run out of steam before the problem is solved.

The researchers don’t envisage the neural net working in isolation, though, Foley said. They think the best solution would be for a program like Brutus to do most of the legwork with the neural net, taking on only the parts of the simulation that involve more complex calculations that bog down the software.

“You create this hybrid,” Foley said. “Every time Brutus gets stuck, you employ the neural network and jig it forward. And then you assess whether or not Brutus has become unstuck.”

Edd Gent is a British freelance science writer now living in India. His main interests are the wackier fringes of computer science, engineering, bioscience and science policy. Edd has a Bachelor of Arts degree in Politics and International Relations and is an NCTJ qualified senior reporter. In his spare time he likes to go rock climbing and explore his newly adopted home.