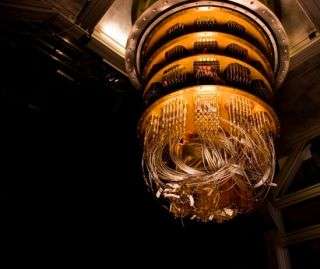 Google’s Sycamore chip is kept cool inside their quantum cryostat.

Google just took a quantum leap in computer science. Using the company’s state-of-the-art quantum computer, called Sycamore, Google has claimed “quantum supremacy” over the most powerful supercomputers in the world by solving a problem considered virtually impossible for normal machines.

The quantum computer completed the complex computation in 200 seconds. That same calculation would take even the most powerful supercomputers approximately 10,000 years to finish, the team of researchers, led by John Martinis, an experimental physicist at the University of California, Santa Barbara, wrote in their study published Wednesday (Oct. 23) in the journal Nature.

“It is likely that the classical simulation time, currently estimated at 10,000 years, will be reduced by improved classical hardware and algorithms,” Brooks Foxen, a graduate student researcher in Martinis’ lab, said in a statement. “But since we are currently 1.5 trillion times faster, we feel comfortable laying claim to this achievement,” he added, referring to the supremacy of quantum computers.

Quantum computers take advantage of the whacky physics of quantum mechanics to solve problems that would be extremely difficult, if not impossible, for classical, semiconductor-based computers to solve.

The calculation that Google chose to conquer is the quantum equivalent of generating a very long list of random numbers and checking their values a million times over. The result is a solution not particularly useful outside of the world of quantum mechanics, but it has big implications for the processing power of a device.

Ordinary computers perform calculations using “bits” of information, which, like on-and-off switches, can exist in only two states: either 1 or 0. Quantum computers use quantum bits, or “qubits,” which can exist as both 1 and 0 simultaneously. This bizarre consequence of quantum mechanics is called a superposition state and is the key to the quantum computer’s advantage over classical computers.

For example, a pair of bits can store just one of four possible combinations of states (00, 01, 10 or 11) at any given time. A pair of qubits can store all four combinations simultaneously, because each qubit represents both values (0 and 1) at the same time. If you add more qubits, your computer’s power grows exponentially. Three qubits store eight combinations, four qubits store 16, and so on. Google’s new computer with 53 qubits can store 253values, or more than 10,000,000,000,000,000 (10 quadrillion) combinations. This number gets even more impressive when another fundamental and equally bizarre property of quantum mechanics enters the show: entangled states.

In a phenomenon described by Albert Einstein as “spooky action at a distance,” particles that have interacted at some point in time can become entangled. This means that measuring the state of one particle allows you to simultaneously know the state of the other, regardless of the distance between the particles. If the qubits of a quantum computer are entangled, they can all be measured simultaneously.

Google’s quantum computer consists of microscopic circuits of superconducting metal that entangle 53 qubits in a complex superposition state. The entangled qubits generate a random number between zero and 253, but due to quantum interference, some random numbers show up more than others. When the computer measures these random numbers millions of times, a pattern arises from their uneven distribution.

“For classical computers, it is much more difficult to compute the outcome of these operations, because it requires computing the probability of being in any one of the 253 possible states, where the 53 comes from the number of qubits — the exponential scaling [of states] is why people are interested in quantum computing to begin with,” Foxen said.

Taking advantage of the strange properties of quantum entanglement and superposition, Martinis’ lab produced this distribution pattern using the Sycamore chip in 200 seconds.

On paper, it’s easy to show why a quantum computer could outperform traditional computers. Demonstrating the task in the real world is another story. Whereas classical computers can stack millions of operating bits in their processors, quantum computers struggle to scale the number of qubits they can operate with. Entangled qubits become untangled after short periods and are susceptible to noise and errors.

Although this Google achievement is certainly a feat in the world of quantum computing, the field is still in its infancy and practical quantum computers remain far on the horizon, the researchers said.

A Fat Tongue May Be Blocking Your Airways While You Sleep