Home Planet Earth A heartbreaking Supreme Court case could be a huge win for the... 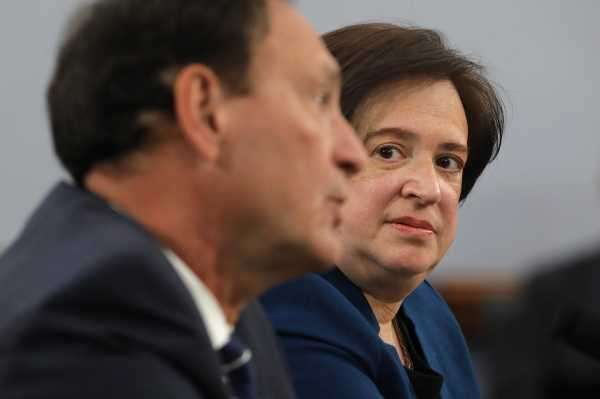 Two stories can be told about Tanzin v. Tanvir, a major religious liberty case that the Supreme Court agreed to hear last Friday.

The first is the story of Muhammad Tanvir, the plaintiff at the heart of the case, and this first story is likely to inspire a great deal of sympathy among liberals. Tanvir says he was approached by two FBI agents who asked him “whether he had anything he ‘could share’ with the FBI about the American Muslim community.” After Tanvir told the agents that he did not wish to become an informant, those agents allegedly threatened him with deportation and placed him on the “No Fly List.”

Because of this treatment, Tanvir also claims that he was unable to fly to see his ailing mother in Pakistan, and that he had to quit a job as a long-haul trucker because he could no longer fly home to New York after a one-way delivery.

The core issue in Tanvir’s lawsuit is whether he may sue these FBI agents for money damages under the Religious Freedom Restoration Act (RFRA), a federal law protecting religious liberty.

RFRA, after all, is the same statute at issue in Burwell v. Hobby Lobby (2014), the Supreme Court’s decision allowing business owners to deny birth control coverage to their employees if the owner objects to contraception on religious grounds. More recently, in Masterpiece Cakeshop v. Colorado Civil Rights Commission (2018), the Court signaled that government officials attempting to enforce an anti-discrimination law may be violating an individual’s religious liberty by doing so.

If the Supreme Court holds that RFRA permits Tanvir to sue the FBI agents, in other words, it could open up a can of worms that could deeply undermine federal anti-discrimination law. Federal officials charged with enforcing many anti-discrimination laws could risk financial ruin if they bring an action against someone who claims that their faith requires them to discriminate.

Suppose, for example, that a boss regularly goes out to drinks with his male subordinates — and often gives them plum job assignments because of the relationships he’s built with them while drinking. Suppose, as well, that this boss adheres to the “Billy Graham Rule,” and claims that it’s against his religion to spend similar time with his female subordinates. This sort of unequal treatment violates federal civil rights law.

Yet by logic similar to Tanvir’s arguments, under RFRA, that same boss would potentially be able to sue any federal official who tried to enforce the law’s safeguards against gender discrimination. The boss’s right to practice his faith — even if that faith were used to justify sexism — could give that boss a claim in federal court.

Tanvir, in other words, presents a deeply fraught conflict between the goal of protecting religious minorities and the goal of rooting out many other forms of discrimination. It’s also likely to put many civil rights advocates in the awkward position of hoping that Tanvir loses his case.

The Supreme Court typically does not favor suits against federal officials

Legally speaking, Tanvir boils down to a conflict over whether RFRA’s vague language permits government officials to be sued for money damages if they violate that law. RFRA provides that “government shall not substantially burden a person’s exercise of religion” except in limited circumstances, and it allows someone who faces such a burden to “obtain appropriate relief” against a government official who violates this law.

But what is “appropriate relief?” A federal appeals court held that RFRA does permit money damages because of the Supreme Court’s decision in Franklin v. Gwinnett County Public Schools (1992), which held that “we presume the availability of all appropriate remedies unless Congress has expressly indicated otherwise.” Franklin allowed a suit for money damages to move forward, so that opinion suggests that such damages are an “appropriate” remedy.

Later Supreme Court decisions, however, state that suits against federal officials are “disfavored.” Thus, in Ziglar v. Abbasi (2017), the Supreme Court cast aspersions on an “ancien regime” where courts “assumed it to be a proper judicial function to ‘provide such remedies as are necessary to make effective’ a statute’s purpose.”

The new regime, by contrast, calls for “a far more cautious course” before allowing federal officials to be sued.

It should go without saying that this view, which was developed by conservative justices over the last 40 years, is not especially popular among civil rights advocates, who typically want broad power to sue government officials who violate individual rights. Yet, because of decisions like Masterpiece Cakeshop, Tanvir is the rare case where civil rights advocates probably have more to lose they they have to gain from a system making it easier to sue government officials.

On the day Masterpiece Cakeshop was decided, most court watchers dismissed it as a very minor decision. The case came to the Supreme Court as a grand showdown over whether religious conservatives have a constitutional right to violate anti-discrimination laws protecting the LGBTQ community.

But the Court largely punted this bigger question. Instead, Masterpiece Cakeshop held that states may continue to enforce their civil rights laws, but it also suggested that government officials have to be careful not to criticize the religious beliefs of people who object to those laws.

Not long after Masterpiece Cakeshop was decided, however, Justice Anthony Kennedy retired from the Court, and he was replaced by the far more conservative Justice Brett Kavanaugh. Kennedy authored Masterpiece Cakeshop, and it’s likely that he wrote the opinion narrowly because he felt cross-pressured by that case. Kennedy was typically supportive of religious liberty claims — he voted with the majority in Hobby Lobby, for example — but he also authored several landmark gay rights cases.

Thus, as someone who is sympathetic both to religious conservatives and to victims of anti-gay discrimination, Kennedy tried to chart a middle course between advocates who were primarily concerned with enforcing civil rights laws and those that wanted to protect “religious liberty” at all costs.

The more conservative Kavanaugh, by contrast, is unlikely to seek such a middle ground, and more likely to give religious conservatives the unqualified victory they seek.

Decades ago, the Court’s religious liberty cases typically protected members of minority religions, such as Seventh-day Adventists who sought the right to honor their sabbath on a Saturday, or Amish who sought to educate their children in the manner prescribed by their faith. It’s only recently, in decisions like Hobby Lobby, that the Supreme Court started allowing members of a politically powerful faith to undercut the rights of third parties.

Thus, in a world where individuals can collect money damages from federal officials who violate their “religious liberty,” a federal employee charged with, say, enforcing laws barring discrimination against women, could wind up facing a very expensive lawsuit if they bring an action against a religious conservative who did.

Think of the previous example of a boss who follows the “Billy Graham Rule.” Current law thinks of this boss as a lawbreaker. But the new, conservative approach to religious liberty paints that boss as a victim — and a victory for Tanvir could turn the boss into a victim with a valuable legal claim.

Even if Kavanaugh adheres to Kennedy’s approach, moreover, that approach still lays traps for government officials who seek to enforce civil rights laws against religious conservatives.

Recall that, in Masterpiece Cakeshop, Kennedy objected to a few statements by Colorado civil rights officials which he viewed as too hostile to conservative religious beliefs — including an unambiguously true statement by a Colorado civil rights commissioner that “freedom of religion and religion has been used to justify all kinds of discrimination throughout history.”

Thus, in a world where federal officials can be sued for “religious liberty” violations, a commissioner on the Equal Employment Opportunity Commission could potentially be sued if they make an off-hand remark that’s dismissive or hostile toward religious beliefs that are used to justify discrimination.

That’s likely to chill civil rights enforcement. Officials could be reluctant to enforce the law if they know that their own pocketbooks could be on the line.