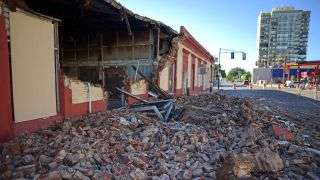 Debris from a collapsed wall litters the ground in Ponce, Puerto Rico following the Jan. 7 earthquake.

A magnitude 6.4 earthquake shook southwestern Puerto Rico this morning (Jan. 7), according to the U. S. Geological Survey (USGS); this is the largest yet in a series of quakes that have hit the region.

At least one person died as walls collapsed around the area, and eight more people were injured, according to NPR. Electricity went out across Puerto Rico as automated systems shut down the island’s power plants, recalling power outages that lasted 11 months after Hurricane Maria, which caused the worst blackout in US history. The North American and Caribbean tectonic plates meet in this area, but the quake doesn’t appear to be the result of those plates grinding together, according to USGS. Instead, a release of energy and stress inside the Caribbean plate seems to have caused the shaking.

A day earlier, a smaller, 5.8 magnitude quake in the same area destroyed a natural rock archway along the coast known as the Punta Ventana, NPR reported. Since a 4.7 magnitude earthquake struck the area on Dec. 28, 2019, more than 400 quakes of at least magnitude 2 have hit Puerto Rico’s southwest region. Eleven have been magnitude 4 or greater, according to USGS.