AN INVESTIGATOR may have uncovered the nails used to crucify Jesus Christ on the cross, after they disappeared from a Jerusalem tomb 30 years ago, a documentary claimed.

In November 1990, archaeologists found a burial cave in south Jerusalem, containing 12 bone boxes, two of which featured the inscription “Caiaphas” – the name given to the Jewish high priest who was behind the crucifixion of Jesus according to the Gospels of the New Testament. Alongside the finds, two Roman-era nails were found, one inside the box and one on the floor beside the ossuary. In the first century, people were buried with items that they thought they needed in the afterlife, and Simcha Jacobovici believes Caiaphas was haunted by his decision to condemn Jesus to death and so requested the iron companions.

However, the nails were lost for almost two decades, until Mr Jacobovici investigated the case, unsuccessfully re-excavating the tomb, so instead, he attempted to retrace their journey during Amazon Prime’s “Decoding The Ancients”.

He said in 2004: “If my hunch is right, and the Israeli archaeologists who were involved in the Caiaphas tomb suspected that the Roman nails found there had something to do with crucifixion, maybe they sent them to Professor Herzkowitz’ lab at Tel Aviv University.

“Now, he’s a forensic anthropologist, he deals with bone, not nails, but crucifixion is where bone meets the nail.

“So maybe someone sent the nails there, maybe that’s the right address for our investigation.” 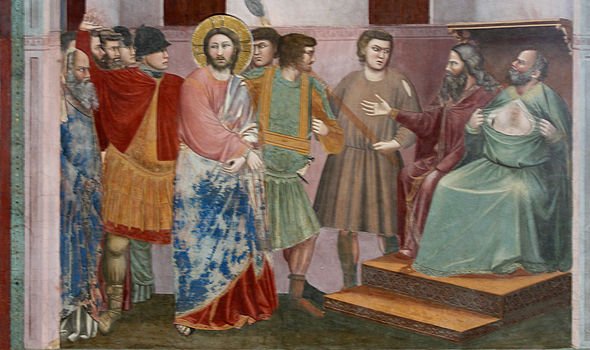 It seems there are the missing nails”

Mr Jacobovici then asked Professor Hershkovitz: “We’ve been tracking two nails that went missing and the antiquities authority say it was probably misplaced, did you ever get two nails together?”

Before Dr Hershkovitz admitted: “Yes, we have two nails together, yes – from Jerusalem.

“These are the two nails from Jerusalem that arrived in the lab more than 15 years ago from the second temple period.”

Excited by the possibility, Mr Jacobovici quickly responded “could it be 18 years ago?” to which the Professor agreed. Mr Jacobovici stated: “It’s the only example of two nails arriving together and the fact that they’re bent this way, would this be consistent with crucifixion?”

Dr Hershkovitz then explained: “It could be, if you put the nail through the palm of the hand, you can easily free the hand.

“The fact that they are bent is more consistent with crucifixion than if they were straight.” 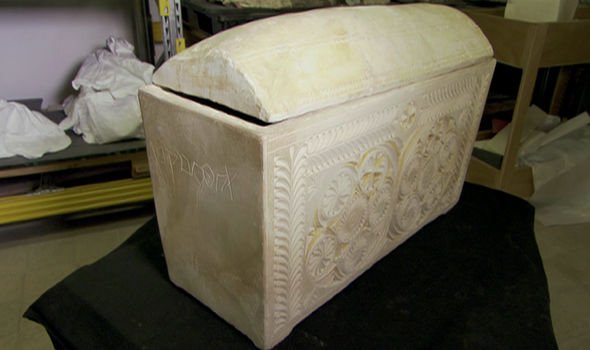 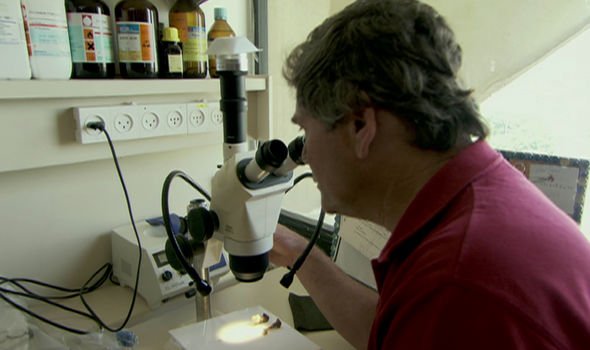 The Caiaphas nails were found in a specific chemical setting with one outside the limestone ossuaries and one inside the ossuary.

Dr Hershkovitz added: “There are remnants of lime on one of the nails, that’s what most ossuaries are made of.”

Professor Herskowitz found the nails were consistent with the only crucifixion nails found anywhere in the world – which is also located in his lab.

The narrator of the series concluded by stating: “It seems there are the missing nails, the nails which came from Jesus’ cross.”

The chamber tomb was discovered by construction workers in November 1990. It was located in the Peace Forest, near the North Talpiot neighbourhood.

Caiaphas is generally accepted, even by otherwise sceptical scholars, as a historical figure. if authentic and attributable to the high priest Caiaphas, the ossuary is an important confirmation of the New Testament account and facilitates understanding of the historical Jesus.

Since the original discovery, the identification with Caiaphas has been challenged by some scholars.

They argue on various grounds, including the spelling of the inscription, the lack of any mention of Caiaphas’s status as High Priest and the plainness of the tomb.