AN ALIEN UFO has been photographed by a NASA satellite orbiting the Sun, a self-styled ET expert has outlandishly announced.

The NASA Solar and Heliospheric Observatory (SOHO) mission is the US space agency’s method for learning about the Sun’s structure and solar atmosphere. Since it began orbiting our star more than two decades ago, the NASA space telescope has made innumerable breakthroughs, from understanding the Sun’s violent solar storms to monitoring its powerful magnetic fields. However, UFO hunter Scott Waring believes NASA’s SOHO has now made its most amazing discovery yet – spotting an huge alien spacecraft flying close to the star. Waring took to his etdatabase.com UFO blog to speculate about the dubious find.

He wrote: “At first I thought the anomaly was just some sort of magma or solar material ejected from the Sun.

“But it doesn’t look like it – the object’s shape just looks too perfect for that.

“There seem to be right angles to it, resembling a modern-day arrow head.

“There are just too many right angles present for it to be a naturally-occurring object.”

Waring proceeds to zoom out of the NASA image, taken on July 24, 2019, to get a better perspective of the solar anomaly. 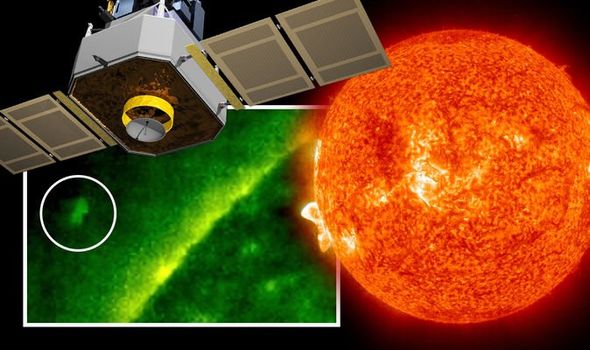 This was taken from SOHO’s EIT 195 camera, which presents the Sun with a greenish filter.

Knowing the Sun’s radius to be 695,510 km, the alien life conspiracy theorist estimates the UFO to be at least 10 times the size of Earth.

And Waring thinks such constructing such enormous spaceship would be easily feasible for technologically advanced alien cultures.

He wrote: “Imagine you are an alien, and you want to build an object bigger than planet Earth.

“Well, it is not too hard if the planet you evolved from is 13.5 billion years old.

“That puts us around 10 billion years behind them then.

“They would be godlike. Here is such a species orbiting our Sun. 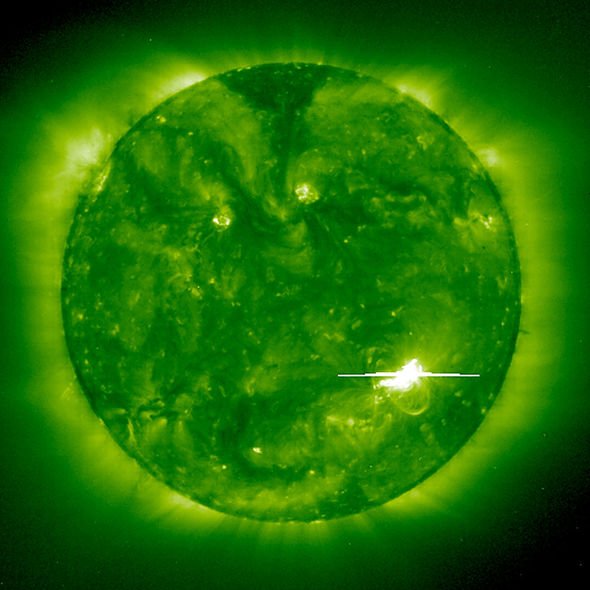 “All the aliens need to do is order their AI robots to build these huge UFOs for them.

“These robots will harvest the necessary materials from other planets or mine asteroids to create this spaceship.”

And Waring, who regularly accuses NASA of covering-up evidence of alien life, claims the space agency may have done so again with this image.

He wrote: “I tried to find the photo again and discovered NASA’s Helioviewer.org won’t allow me to see it.