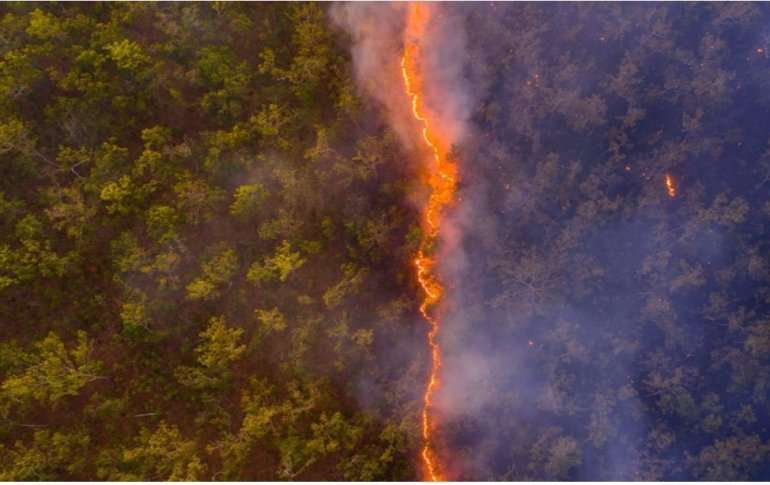 Scientists have studied how steppe forest fires affect meteorological parameters of the atmosphere and the content of different compounds in it. They managed to register noticeable changes in the gas composition of the air – the authors suggest to be guided by them in order to detect and extinguish the steppe fire before it is too late. The results of the work, supported by a grant from the Presidential Program of the Russian Science Foundation (RSF), were published in the journal Atmosphere.

The climate is changing, and every year we hear more and more about new wildfires in the news, often with humans having a hand in their outbreak. Huge territories are turned into scorched wastelands, animals and people die. Combustion products (oxides of nitrogen, carbon, sulfur, etc.) and particulates pollute the atmosphere, and their excessive content can be registered even at some distance from the forest fires.

“Back in the last century, people realized how important it was to study wildfires. If we can understand what processes take place directly in the burning zone, we can not only fight and control these dangerous situations more effectively, but prevent them altogether,” says Denis Kasymov, PhD in Physics and Mathematics, Head of the Educational Laboratory of the Department of Physical and Computer Mechanics of Tomsk State University’s Faculty of Mechanics and Mathematics, the project manager for the Russian Science Foundation grant.

– Together with our colleagues from the Institute of Atmospheric Optics SB RAS we conducted a semi-natural experiment: under strict control we recreated a steppe forest fires on a small area, 40 by 15 meters, and investigated the main characteristics for this area – humidity, temperature, pressure, air flows and the content of various substances in the air. We were helped in this by remote instruments such as infrared thermographs, ultrasonic weather stations, and devices for recording greenhouse and oxidizing gases at a special station.”

Temperature and humidity rise sharply at the scene of the fire, but the burning process itself is very uneven – somewhere the plants grow thicker, somewhere they are more “juicy”. The most interesting results were obtained in the analysis of data for air flows. Since a lot of heat was released on the site (the maximum temperature was above 900 ° C), the heated air rose upwards, thereby increasing the contribution of the vertical component of the wind, which, of course, also affects the fire. We got a kind of pump, pumping oxygen from the environment – the fire supplies itself with fuel, the combustion is accelerated. Such a phenomenon – “our own wind” – was theoretically described at the end of the last century, but the experimental evidence of its existence has appeared only now.

There are a lot of factors, and it is impossible to reproduce them accurately during computer modeling. Field experiments are complicated and dangerous, as well as different external conditions – you need a lot of data to gather statistics. In addition, heating brings chaos to natural flows: smooth, unmixed (laminar) air jets become vortices. This not only contributes to the spread of the fire to new areas, but also disrupts atmospheric patterns. For example, rain clouds disperse, and precipitation that would put out the fire simply does not fall.

“Also, our experiments have shown that even a small fire contributes to the release of significant amounts of pollutants into the atmosphere. In addition to oxides, it’s also methane, but we can’t yet explain where it comes from. In any case, although the gases did not get to our station immediately because of the air currents, we were able to register them. So, this approach makes it possible to detect a fire in the early stages – before it has catastrophic consequences – and extinguish it in time,” sums up Denis Kasymov.

Blood Moon: Prophecy is unfolding as preacher warns of July 4...

‘Gay’ Penguin Couple Had No Egg of Their Own. So They...