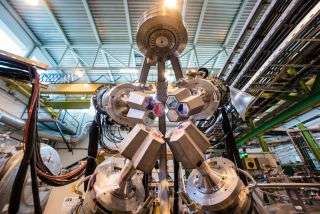 Equipment at the ISOLDE proton-blasting laboratory where astatine was isolated and studied. ISOLDE is part of CERN, the European particle physics research collaboration.

Wielding proton beams and lasers, physicists have for the first time unlocked one of the key secrets of the rarest naturally occurring element on Earth: astatine.

Astatine is a «halogen,» meaning it shares chemical properties with fluorine, chlorine, bromine and iodine (all elements that typically bind with metals to form salts). But with 85 protons, it’s heavier than lead and is extraordinarily rare on Earth — the rarest of the elements that occur naturally in Earth’s crust, according to chemist John Emsley’s 2011 book «Nature’s Building Blocks» (Oxford University Press). It forms from decaying uranium and thorium, and its most stable version, or isotope, (called astatine-210) has a half life of just 8.1 hours — so if you found a stash of it in the morning, half of it would be gone by the evening.

It’s so rare that until recently, researchers had never managed to gather enough of it to test how it interacts with electrons. That’s a problem, in part because one of its radioactive isotopes, astatine-211 has the potential to be useful in cancer therapies. But researchers weren’t sure how likely it is to attract electrons and form negative ions, which could be harmful to healthy cells. A new paper changes that.

The project to understand astatine took place at ISOLDE, the part of the European Union’s flagship CERN particle physics research center that focuses on blasting proton beams against hot and heavy targets made of different chemical elements

The 18 biggest unsolved mysteries in physics

For this effort, the researchers fired the protons at a target made of atoms of thorium, an unstable element with 90 protons. That produced a smattering of new atoms, including astatine-211.

Filtering the astatine-211 from the rest of the atoms, the researchers built a large enough stockpile of the always-decaying radioactive substance to use in their laser experiments. Focused light can knock around the electrons on an atom, allowing researchers to make precise measurements of their behavior.

—The mysterious physics of 7 everyday things

—What’s that? Your physics questions answered

The ionization energy was about 9.31752 electronvolts. The electron affinity is about 2.41579 electronvolts. Together, those two numbers form a complete picture of how the heavy, rare element interacts with electrons. (The full practical implications of those numbers will take years to be understood, but precisely determining them is a major hurdle overcome.)

ISOLDE trumpeted the result as confirmation of theoretical modeling work that had been going on at the same time in the lab. The immediate consequence of this result could be for cancer research, ISOLDE said. Astatine-211 releases alpha particles as it decays, radioactive barbs made up of protons and neutrons that can kill cancer cells. But determining how to use radioactive astatine salts in cancer therapies demands a deep understanding of how the element creates negative ions. As astatine snags electrons from molecules in healthy cells in the body, it turns them into negative ions, which can harm healthy cells. Researchers need a precise understanding of that process to deliver the best therapies.

Eventually, ISOLDE said, their techniques could unlock the mystery of the super-heavies — elements that exist only briefly in laboratories in tiny quantities with properties that scientists barely understand at all.