Home Planet Earth How a research ship drifting near the North Pole avoided a coronavirus... 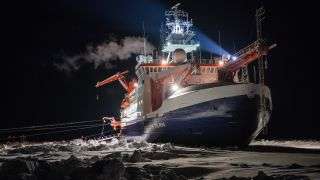 The consequences of the coronavirus outbreak have affected one of the most remote scientific expeditions on the planet: the research ship Polarstern, which is carrying hundreds of researchers as it drifts in sea ice near the North Pole.

Some scientists have been able to come and go by aircraft, which can land on an ice runway near the ship. But a scientific experiment planned for this month, which would have involved an aircraft taking atmospheric measurements around the ship, was postponed after a team member tested positive for the novel coronavirus.

“One member of a team for scientific flights with our research aircraft tested positive for the virus late last week,” said expedition leader Marcus Rex, of Germany’s Alfred Wegener Institute, which operates the Polarstern.

The team member tested positive for the virus before joining the expedition and so never traveled to the ship. He and about 20 other members of the aircraft team are now under quarantine at their homes in Germany, Rex said.

The planned aircraft experiment, which would have entailed making measurements of gas concentrations in the Arctic atmosphere, has been postponed until the quarantine is lifted, but the rest of the expedition — dubbed the Multidisciplinary drifting Observatory for the Study of Arctic Climate, or MOSAiC — has not been affected.

“The research aircraft operations are a component of MOSAiC, which is quite separate from the rest of the expedition,” Rex told Live Science in an email. “Only this component is affected at this point.”

Coronavirus precautionsThe Polarstern and hundreds of scientists on board are drifting with ice near the North Pole to learn more about the Arctic environment during the polar winter.

Expedition members who are due to join the Polarstern near the North Pole are tested for coronavirus twice, Rex said — once before leaving their home country, and then again at Svalbard, a Norwegian archipelago inside the Arctic Circle and the place of their final departure to the ship.

The team member infected with the virus tested positive in the first round of tests, on March 5 at the headquarters of the Alfred Wegener Institute in Bremerhaven, Germany.

Rex said the system of twin tests had been successful so far. “This concept has proven to work,” he said. “It [has] successfully prevented the virus getting to the expedition.”

If the coronavirus did reach the Polarstern, the consequences could be serious.

More than 600 people from 20 countries — including the United States, Canada, Germany, China and the United Kingdom — are taking part in different stages of the MOSAiC expedition, which involves the Polarstern icebreaker drifting with floating sea ice across the North Pole over the winter.

“It’s very close quarters,” Lynne Talley, an oceanographer at the Scripps Institution of Oceanography in La Jolla, California, told Nature. “Suppose someone inadvertently does end up on the ship with this virus … it would just pretty much take the entire ship.”

Sick bayThe Polarstern trapped itself in the floating sea ice late last year and will drift wherever the ice takes it until the northern summer.

Fortunately, some measures were already in place to prevent a disease from spreading during the expedition.

“We do have an isolation station on board of Polarstern. … We are prepared to implement measures to contain any outbreak of an infectious disease on board,” he said.

Further measures have been put in place since the coronavirus became a concern.

“We have implemented our strict concept to minimize the risk of importing the virus to the expedition,” he said. “We are observing the developing situation very closely and will adapt our safety concept if needed.”

The MOSAiC expedition has taken many years of planning and more than $130 million to achieve. Polarstern set out from Bremerhaven in September and became surrounded by sea ice a few weeks later; it’s expected to remain drifting amid the floating sea ice until the Arctic summer.

Until then, scientists on the ship and in camps on the ice nearby are carrying out experiments to learn more about the energy sources involved in melting and moving the sea ice; the formation and precipitation of Arctic clouds; and the effects of heat and mass transfers between the atmosphere, the ice and the ocean.

The expedition was inspired by the 1893 voyage of the Fram, commanded by Norwegian polar explorer Fridtjof Nansen, who hoped that his ship could float to the North Pole surrounded by sea ice; bad weather and ice conditions eventually forced them to give up and return to Norway years later.