Home Planet Earth Out of Deep-Sea Mud, a Strange Blob May Hold Secrets to the... 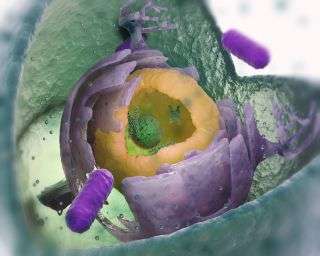 Eukaryotic cells, as illustrated here, evolved from single-celled organisms around 2 billion years ago.

A microbe found in the muddy depths of the Pacific Ocean doesn’t look like much other than a blob with tentacles. But this unassuming little critter may hold the secrets to how the first multicellular life-forms evolved, according to new research.

Long before complex organisms existed, the world was home to simple single-celled organisms, archaea and bacteria. Between 2 billion and 1.8 billion years ago, these microorganisms began to evolve, leading to the emergence of more complex life-forms called eukaryotes, a group that includes humans, animals, plants and fungi. But this incredible journey over which life transitioned from swimming blobs to walking (and, in some cases, thinking and feeling) animals is still poorly understood.

Scientists had previously hypothesized that a group of microbes called Asgard archaea were the much-sought ancestors of eukaryotes, because they contain similar genes to their complex counterparts, according to a statement. To analyze what these microbes looked like and how this transition might have happened, a group of researchers in Japan spent a decade collecting and analyzing mud from the bottom of the Omine Ridge off the coast of Japan.

The team kept the mud samples — and the microorganisms in them — in a special bioreactor in the lab that mimicked conditions of the deep sea in which they were found. Years later, they began to isolate the microorganisms within the samples. The scientists’ initial purpose was to find microbes that eat methane and that might be able to clean up sewage, according to the New York Times. But when they discovered that their samples contained a previously unknown strain of Asgard archaea, they decided to analyze it and grow it in the lab.

Scanning electron microscopy images show (A) a single archaea (B) multiple cells growing together in the lab (C&D) archaea with tentacle-like protrusions that occur toward the end of their growth.

They named the newly found strain of Asgard archaea after the Greek god Prometheus, who is said to have created humans from mud. They found that these archaea were relatively slow growers, only doubling in number every 14 to 25 days.

Their analysis confirmed that had a great number of genes that resembled those of eukaryotes. Indeed, these genes held the instructions for creating certain proteins found inside these microbes; but the proteins did not, as expected, create any organelle-like structures like the ones found inside eukaryotes.

The authors propose a hypothesis for what went on in these ancient waters: Around 2.7 billion years ago, oxygen began to accumulate on our planet. But having lived in a world without oxygen for so long, this element would prove toxic to P. the authors explained in a video.

So the may have developed a new adaptation: a way to form partnerships with bacteria that were oxygen-tolerant. These bacteria would give the necessary vitamins and compounds to live, while, in turn, feeding on the archaea’s waste.

As oxygen levels increased even further, might have become more aggressive, snatching passerby bacteria with its long tentacle-like structures and internalizing it. Inside the , this bacteria might have eventually evolved into an energy-producing organelle key to eukaryote-survival: the mitochondria.

The team’s “success in culturing after efforts spanning more than a decade represents a huge breakthrough for microbiology,” Christa Schleper and Filipa L. Sousa, both researchers at the University of Vienna who were not involved in the study, wrote in an accompanying editorial in the journal Nature. “It sets the stage for the use of molecular and imaging techniques to further elucidate the metabolism of and the role of [eukaryotic signature proteins] in archaeal cell biology.”

The findings were published Jan. 15 in the journal Nature.