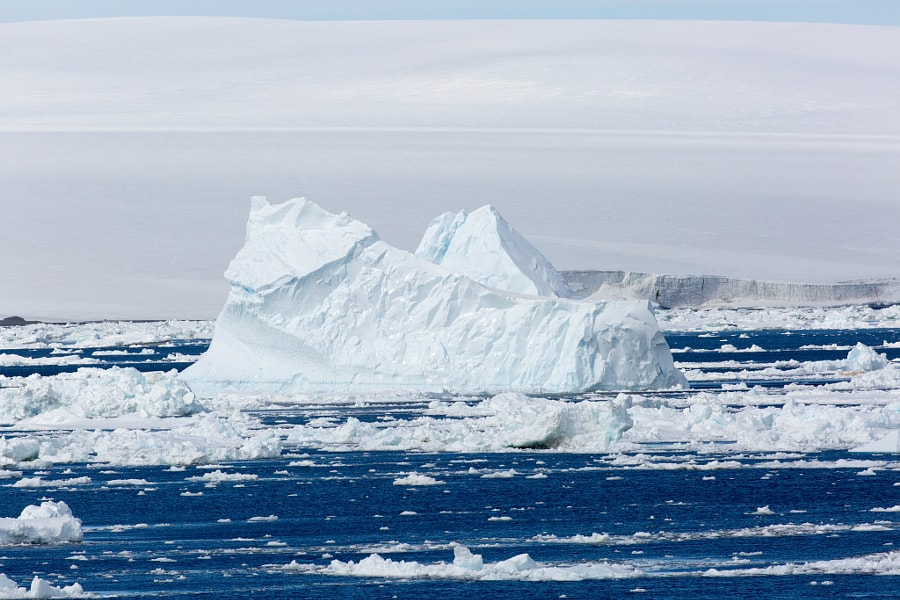 From the shores of Antarctica broke off the largest iceberg in the world today – it can accommodate one and a half Moscow, three St. Petersburg or five Volgograd. The elongated ice island is 170 kilometers long and 25 kilometers wide: the total area is 4,320 square kilometers. The iceberg has been named A-76; along with the past record holder A-23A, it remains in the Weddell Sea.

However, A-76 is not the largest iceberg – B-15, which broke away from the Ross Ice Shelf in 2000, was larger than the current one by two and a half times. Now it has almost completely split into smaller ice floes and melted – presumably, the same fate awaits A-76.

Compared to the A-76, the iceberg, which sank the Titanic, is just a baby. Although even that size in 1912 was enough to send the steel liner to the bottom. It is for shipping that icebergs pose the greatest threat: when entering iceberg waters, the ship’s speed is bound to decrease.

For the most part, encounters with icebergs are tried to be prevented: large icebergs are monitored and ship crews are warned of the approaching danger. Certain difficulties in trying to constantly monitor ice mountains are caused by weather – usually they drift in places with difficult meteorological situation. Satellite imagery is the main observation method: it is realistic to detect an iceberg of over 20 m in size at an area of 2,500 km² in one image.

In order to protect shipping areas and offshore oil platforms from collisions with icebergs they are towed aside. Due to the instability, breaking of the block and melting of the ice, this remains a challenge. The iceberg is a potential source of drinking water. The possibility of transporting ice blocks to arid regions of the planet is being discussed – such an idea was expressed about two hundred years ago, but has not yet been realized. French scientists calculated that it is possible to deliver an iceberg weighing up to 7 million tons from the shores of Newfoundland to the Canary Islands in 141 days. The amount of ice is enough for 35,000 people for a year.

On March 19, 1952, the American pilot Joseph Fletcher landed a C-47 on an iceberg with an area of 90 square kilometers. The team set up a science station there that remained inhabited for 22 years. The dry designation of the station “T-3” was eventually changed to “Fletcher’s Ice Island”. And this is not an isolated case – inhabited research bases are built on icebergs, and for supplying stations in the Antarctic they are used as berths. This approach is used when ice conditions do not allow a ship to approach the barrier and the landfast ice is absent or insufficiently strong. In this case the vessel is moored to the stoloid iceberg and cargo and people are taken from it by airplanes and helicopters.

Scientists can predict the appearance of new floating ice islands. Before it breaks away, the glacier grows substantially and only when it gains critical mass, it cracks and disconnects. So in the middle of the decade is expected to detach a large iceberg from the Amery Ice Shelf Glacier in East Antarctica.

Russian scientists do not link the separation of iceberg A-76 with the problem of global warming. TASS quotes Andrei Korotkov, a researcher of the ice forecasting department of the Arctic and Antarctic Research Institute: “We should not exaggerate the significance of this event. And certainly not to associate it with accelerated degradation of the Antarctic ice sheet or global warming. This natural phenomenon has a cyclical nature. That is, approximately every 60 years, icebergs break off from the glaciers, which have increased to their limit.

All materials on this site are taken from open sources - have a link back to the material on the Internet or sent by visitors to the site and are provided for informational purposes only. Rights to the materials belong to their owners. Administration of the site is not responsible for the content of the material. If you found materials on our website that violate copyrights belonging to you, your company or organization, please let us know.
Contact us: [email protected]l.com