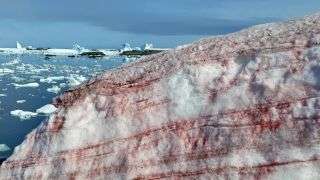 It’s summer in Antarctica, which means record-high temperatures, jarring glacial melt and — in a very metal symbol of our changing climate — a bit of blood-red snow spattered across the Antarctic Peninsula.

Over the past several weeks, the ice around Ukraine’s Vernadsky Research Base (located on Galindez Island, off the coast of Antarctica’s northernmost peninsula) has been coated in what researchers are calling “raspberry snow.” A Facebook post by the Ministry of Education and Science of Ukraine shows the scene in full detail: streaks of red and pink slashing across the edges of glaciers and puddling on the frosty plains.

Blood-red algae blanket the snow near Antarctica’s Vernadsky Research Base.

That blood (or “jam” as the researchers whimsically call it) is actually a type of red-pigmented alga called , which hides in snowfields and mountains worldwide. The algae thrive in freezing water and spend winters lying dormant in snow and ice; when summer comes and the snow melts, the algae bloom, spreading red, flower-like spores.

This phenomenon, which Aristotle noticed way back in the third century B.C., is known as “watermelon snow,” “blood snow” and a host of other less poetic names.

The phenomenon’s red color comes from carotenoids (the same pigments that make pumpkins and carrots orange) in the algae’s chloroplasts. In addition to their crimson hue, these pigments also absorb heat and protect the algae from ultraviolet light, allowing the organisms to bask in the summer sun’s nutrients without risk of genetic mutations.

That’s good for the algae but not great for the ice. According to the Ukrainian researchers, it’s easy for these blooms to kick off a runaway feedback loop of warming and melting.

“Snow blossoms contribute to climate change,” the team wrote in the Facebook post. “Because of the red-crimson color, the snow reflects less sunlight and melts faster. As a consequence, it produces more and more bright algae.”

A similar feedback process is driving more extreme algal blooms in oceans all over the world, resulting in surreal scenes like an invasion of sea foam in Spain and blue, bioluminescent “tears” clinging to China’s coasts. While watermelon snow has existed for millions of years, algal blooms thrive in warm weather, meaning we can probably expect to see more events like this as the climate changes.