UFO watchers claim to have spotted an oddly-shaped alien Mars base in a newly-released NASA Curiosity Rover photo.

Self-proclaimed alien life expert Scott Waring took to his etdatabase.com blog to speculate about the apparent B-shape spotted in a NASA Mars Curiosity Rover image. He said: “While searching through a Mars photo I found a rugged area of terrain that seemed to have been created by mining.

“Then I found a huge structure along a hillside, with other structures nearby.

This is absolute proof that intelligent aliens lived, thrived and died on Mars

“There was also the capital letter B on a hillside.”

The conspiracy theorist speculated how the B might be an entire word in their language or an important symbol.

He added: “This is absolute proof that intelligent aliens lived, thrived and died on Mars.” 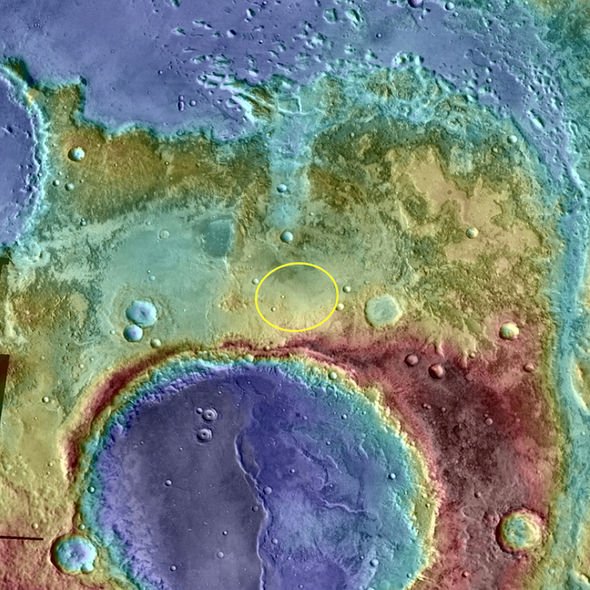 Although the letter ‘B’ represents many things on planet Earth, the UFO enthusiast does not believe it means ‘B’.

He said: “I think the B is either a symbolic drawing of an alien city, a species or an alien leader who once lived in this area.”

Waring proceeded to use sophisticated imaging software to enhance the bizarre Mars anomaly spotted in an enormous Gigapan panoramic photograph.

He said: “You can see it very clearly on the Martian hillside.”

The alien life conspiracy theorist then examined another strange “structure” nearby the apparent B shape.

He said: “There appears to be a foundation that has slid down this hill.”

The shape is notable for having straight lines, something usually associated with intelligent design.

There also appears to be another, not dissimilar, shape close by. Both of the supposed alien structures were spotted by Waring lying in the Mawrth Vallis valley.

Situated between the southern highlands and northern lowlands, NASA scientists believe the valley is a channel formed by massive flooding which occurred in Mars’ ancient past.

Waring also discussed a shape vaguely resembling a triangle lying to the anomaly’s left-hand side.

He said: “There is definitely, 100 percent, something is lying buried here.

“There is a triangle object with something buried in its centre.”

YouTube viewer Mick Welch appeared convinced by the bizarre blog post, commenting: “Any sane mind knows NASA is not sending all these probes and landers to Mars for years to just dig up dirt.

“We’ve spent more time on Mars than the Moon for some reason.”

And Charleen Sampson agreed, writing: “Looks like entrances where you pointed out a triangle/pyramid!

“It definitely looks more like a B when you went back to it a 2nd time.

“Great finds! So much evidence up there, it’s beyond comprehension!”