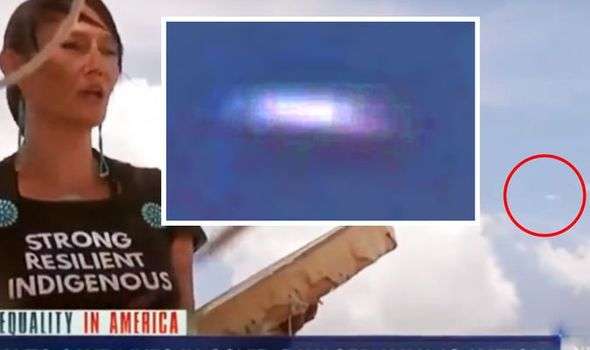 UFO watchers believe an NBC News broadcast has accidentally captured an alien craft hovering over Area 51, which is believed by many to be a UFO hotspot.

Eagle-eyed UFO enthusiasts bizarrely believe footage captured a disk shooting out of the clouds in the far distance to the right of the screen. The video segment features Cynthia McFadden of NBC News discussing the water crisis affecting the Navajo people in Arizona, where at least 30 percent of the houses on the reservation lack running water.

Arizona is a huge bullseye of a hotspot for UFOs

He said: “UFO’s are often seen by Indians and have often been called spirits.

“I’m not sure why NBC Nightly News missed it, but they were probably focused so much on the girl they ignored all else.

“Did the UFO deliberately shoot across the background to get caught on TV? “Probably not, but they were more likely on their way when they noticed the TV crew and people gathered.”

Mr Waring added how he thinks it is no coincidence the footage was shot so close to America’s most famous top-secret military base Area 51, a location long associated with alien conspiracy theories.

He said: “Arizona is a huge bullseye of a hotspot for UFOs.

“With Area 51 in nearby Nevada desert and Nellis Air Force Base also in Nevada, we kinda know where this UFO was headed toward – Nevada.” The witness said: “The August 3 issue of NBC Nightly News caught my attention by describing how the Navajo Indians are fighting a water crisis amid the coronavirus pandemic.

«But after watching this issue I found something else there — a disc-shaped UFO flying by at that very moment when the Indian shaman cried out to the gods.

“Notice how the UFO ‘rips open’ the cloud as it flies out.”

This week’s so-called UFO sighting is one of many to have been announced by conspiracy theorists this year.

In February, video emerged purporting to show a fleet of alien spacecraft flying over Arizona.

And in March, satellite photos allegedly showed a dozen mystery objects emerging from rows of hangars at the top-secret Tonopah Test Range Airport.

What takes place inside Area 51 has been the subject of wild speculation for decades. 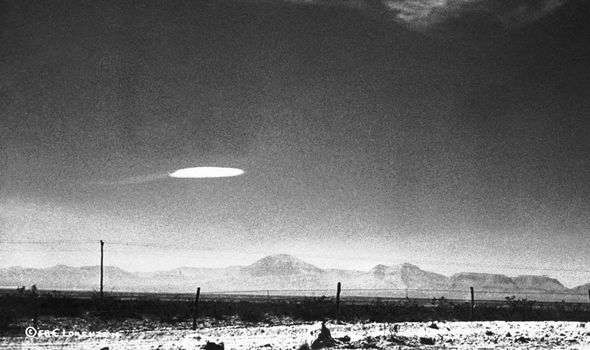 The most bizarre of these claims insist intelligent aliens are stashed away somewhere inside.

The earliest and arguably most infamous of all Area 51 conspiracy theories claims the 1947 Roswell crash was actually a Soviet aircraft piloted by aliens.

And others even insist the US government faked the 1969 Apollo 11 Moon landing by filming the famous footage in one of Area 51’s enormous hangars.

Life after death: Man opens up about seeing Jesus in the...