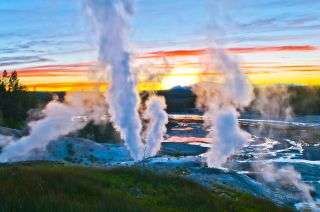 A swath of Yellowstone National Park larger than Chicago has been rising and falling in erratic jitters over the past 20 years, and it’s all because of some wayward magma, a new study finds.

This magma has been so active, it’s responsible for lifting up the area around Norris Geyser Basin at Yellowstone a total of 5 inches (almost 13 centimeters) since 2000.

“That discovery motivated our quest to understand the cause(s) of uplift and subsidence [sinking] near Norris,” Daniel Dzurisin, a co-researcher of the new study and a retired research geologist with the U.S. Geological Survey (USGS) Cascades Volcano Observatory in Vancouver, Washington, told Live Science in an email.

A magnitude-4.9 earthquake struck the basin in March 2014, and the land rose and fell like a slow-motion Jack-in-the-box until early 2019. After all of this incredible movement, the basin is now about 5 inches above where it was 20 years ago.

So, what caused all this commotion?

To find out, the researchers used a combination of GPS and satellite data to map and track Earth-changing events at Norris and the Yellowstone caldera (a volcanic crater) over time, Dzurisin said.

“There are about two dozen GPS stations in the park that operate continuously, providing very precise information about ground movements in three dimensions at those locations,” Dzurisin said. Meanwhile, the satellite sensed whether the land had moved toward or away from the satellite, which allowed it to produce “a complete map of ground movements over very large areas,” Dzurisin said.

Together, the GPS and satellite data showed the culprits for the tumultuous movement at Norris Geyser Basin. First, the data revealed an intrusion of magma about 10 miles (16 km) underground that caused the 1996 to 2001 uplift.

The two recent Earth-moving events in 2013-2014 and again in 2016, can be explained by fluids that bubbled out from the intruded magma. In late 2013, these fluids accumulated into a sealed, underground reservoir that ruptured when the 2014 earthquake hit. Once the reservoir broke, the fluids escaped, causing sinking above the old reservoir as the fluids flowed westward and upward along the region’s underground faults and fractures. In 2016, these fluids escaped again and accumulated closer to the Earth’s surface.

As these fluids became stuck underground and pressure built up, the ground above them rose, and when the fluids got expelled and moved to a new location, the ground above where they once were sank, National Geographic reported.

The study is the first to identify a complete cycle of magma intrusion, as well as fluids escaping, traveling upward and then accumulating elsewhere, he said.

Furthermore, it’s possible that the escape of these fluids to just below the Earth’s surface might be related to the increased activity at Steamboat Geyser — located in the Norris basin — starting in early 2018, Dzurisin said.

The study was published online Jan. 28 in the Journal of Geophysical Research: Solid Earth.

Can wearing a face mask protect you from the new coronavirus?