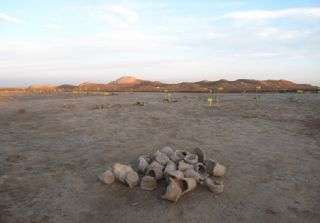 The sacred plaza, seen here, was at the heart of Girsu. A cultic area that had over 300 broken ceremonial objects was recently uncovered near its entrance.

Archaeologists recently unearthed a 5,000-year-old cultic area that held fiery feasts, animal sacrifices and ritual processions dedicated to Ningirsu, a Mesopotamian warrior-god, at the site of Girsu (also known as Tello) in Iraq.

In an area of Girsu known as the Uruku (a name which means “the sacred city”), archaeologists excavated more than 300 broken ceremonial ceramic cups, bowls, jars and spouted vessels along with a large number of animal bones. The items were within or near a “favissa” (ritual pit) that was 8.2 feet (2.5 meters) deep, said Sebastien Rey, director of the British Museum’s Tello/Ancient Girsu Project, and Tina Greenfield, a zooarchaeologist at the University of Saskatchewan who works on the project. Greenfield presented the team’s findings at the American Schools of Oriental Research annual meeting held in San Diego in November 2019.

A photo showing sections of the favissa (ritual pit) that is part of the newly found cultic area.  (Image credit: S. Rey/Tello/Girsu Project)

One of the most striking objects the archaeologists found was a bronze figurine shaped like a duck, with eyes made out of shell. The object may have been dedicated to Nanshe, a goddess associated with water, marshlands and aquatic birds, Rey and Greenfield told Live Science in an email. The researchers also uncovered a fragment of a vase that has an inscription dedicated to Ningirsu.

Rey and Greenfield said that the cups and goblets they found were probably used in a religious feast before being ritually discarded in the pit, while the bones — which were from sheep, cow, deer, gazelle, fish, goat, pig and birds — were likely the remains of animals that were either consumed or killed for ritual sacrifices.

The area has a thick layer of ash that was likely left over from large ritual fires. The team also found eight ash-filled oval structures that were likely the remains of lanterns or floor lamps.

Archaeologists believe that the cultic area was in use during a time period called the “early dynastic,” which lasted between 2950-2350 B.C.

The large number of ceremonial ceramics as well as the burnt floors and a favissa strongly connects the recently uncovered cultic area to the place “where according to the cuneiform texts religious festivals took place and where the population of Girsu gathered to feast and honour their gods,” Rey and Greenfield said in the email.

Cuneiform tablets found at Girsu in the late 19th and early 20th century describe the religious feasting and processions that the cultic area was used for. The tablets say that a religious feast in honor of Ningirsu was carried out twice a year and lasted for three or four days, Rey and Greenfield said.

During the festival, a religious procession began at the center of Girsu and crossed the city’s territory before arriving at the “Gu’edena,” an area that may have been located just outside Girsu — and then turned back and ended at Girsu’s center.

Archaeological work is ongoing at Girsu, and the researchers will continue to publish new findings in the future.