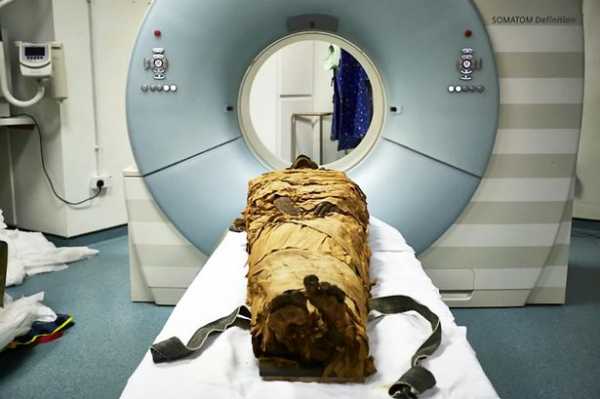 The Egyptian priest, known as Nesyamun, hasn’t spoken in more than 3,000 years, but now his voice has been synthesised

An ancient Egyptian mummy has been 'brought back to life' after British scientists recreated its voice.

The Egyptian priest, known as Nesyamun, hasn't spoken in more than 3,000 years. Now the sound produced by his vocal tract has been synthesised using CT scans, 3D printing – and an electronic larynx.

The audio recording lasts only a second – but gives listeners an idea of his deep powerful tones as he chanted songs for worshippers.

Co-corresponding author Professor David Howard a biomedical engineer from the University of London said: "The process is only feasible when the relevant soft tissue is reasonably intact – as in the case of the 3,000 year-old mummified body of the Egyptian priest Nesyamun."

His remains are contained in a beautiful, ornate coffin which is today on display at Leeds City Museum.

Known locally as The Leeds Mummy, the coffin and its occupant have captivated visitors to the city for almost 200 years – and is one of the museum's most famous exhibits.

Prof Howard said: "He lived during the politically volatile reign of pharaoh Ramses XI (c.1099–1069 BC) over 3,000 years ago, working as a scribe and priest at the state temple of Karnak in Thebes – modern Luxor. His voice was an essential part of his ritual duties which involved spoken as well as sung elements."

The fundamental frequency, loudness and vibration rate and depth can be individually controlled.

Prof Howard said: "Of vital perceptual importance in recreating a natural vocal sound is the application of some form of fundamental frequency variation.

"Nesyamun's duties included speaking as well as chanting or singing the daily liturgy, so the vocal tract organ was used to provide a falling intonation in the male speech fundamental frequency range." 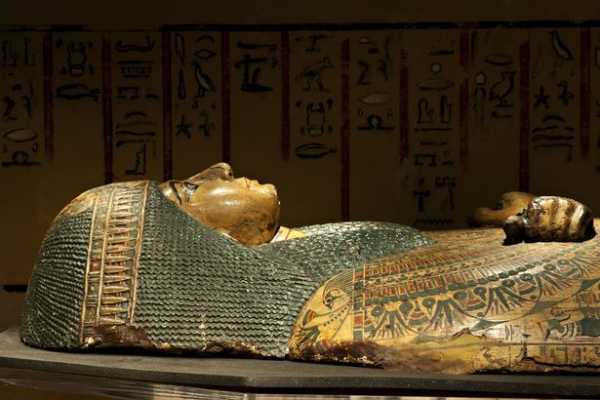 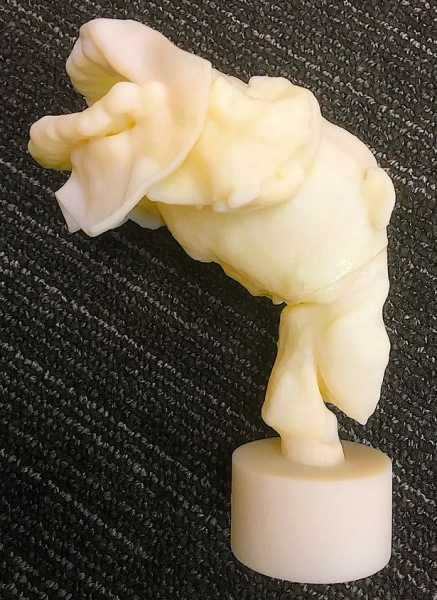 His team used a non-destructive CT (computed tomography) scanning technique to analyse the structure of the larynx, or voice box, and throat without damaging them.

They saw a significant part remained intact as a result of the mummification process – enabling them to measure the shape of the vocal tract shape from the images.

The human vocal tract is basically a tube with two flaps just above the lungs that can go faster or slower, producing higher or lower pitches, respectively.

As muscles in the diaphragm pump out air, it works much like a saxophone where the reed vibrates at the top.

Based on the measurements, the researchers created a 3D-printed replica of Nesyamun's vocal tract – and combined it with an artificial larynx commonly used in speech synthesis. 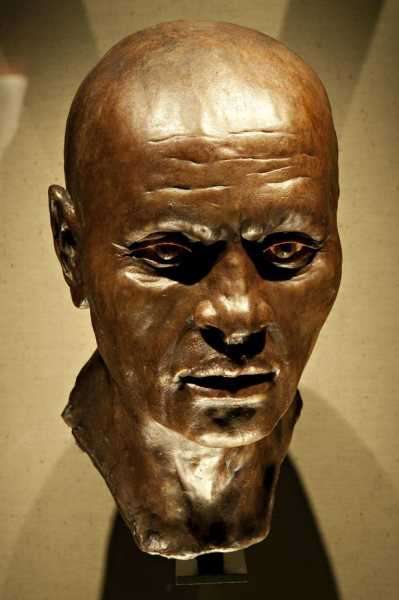 This enabled them to reproduce a single sound – falling somewhere in between the vowels in the English words 'bed' and 'bad', for instance.

In ancient Egypt it was a fundamental belief that "to speak the name of the dead is to make them live again", said Prof Howard.

This was vital to both living relatives and by the deceased themselves "when appearing before the gods of judgement."

Prof Howard said: "Given Nesyamun's stated desire to have his voice heard in the afterlife in order to live forever, the fulfilment of his beliefs through the synthesis of his vocal function allows us to make direct contact with ancient Egypt by listening to a sound from a vocal tract that has not been heard for over 3,000 years, preserved through mummification and now restored through this new technique."

Previous studies on Nesyamun have found he was in his mid 50s when he died. He had gum disease and severely worn teeth. 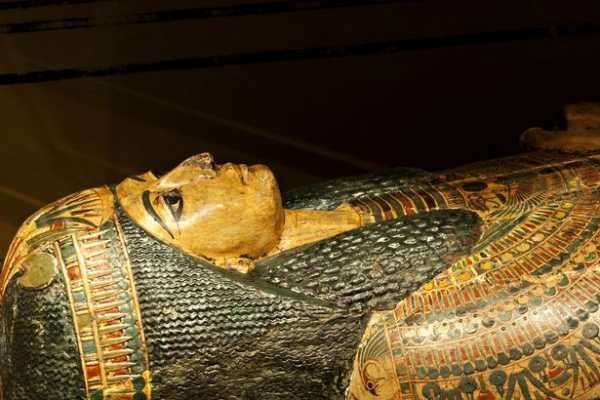 Prof Howard said: "Only those able to verbally confirm they had led a virtuous life were granted entry into eternity and awarded the epithet 'maat kheru' – true of voice – as applied to Nesyamun himself throughout his coffin inscriptions.

"In these texts, Nesyamun asks that his soul receives eternal sustenance, is able to move around freely and to see and address the gods as he had in his working life."

His documented wish to be able to speak after his death – combined with the excellent state of his mummified body – made Nesyamun the ideal subject for the 'Voices from the Past' project.

Just over three years ago his mummified body was transferred to nearby Leeds General Infirmary.

It was removed from its coffin and transferred onto the couch of a CT scanner – where it went in head first.

Since human remains have unique status not as 'objects' but as the parts of once-living people, it was also necessary to consider the ethical issues raised by the research and its possible heritage outcomes. 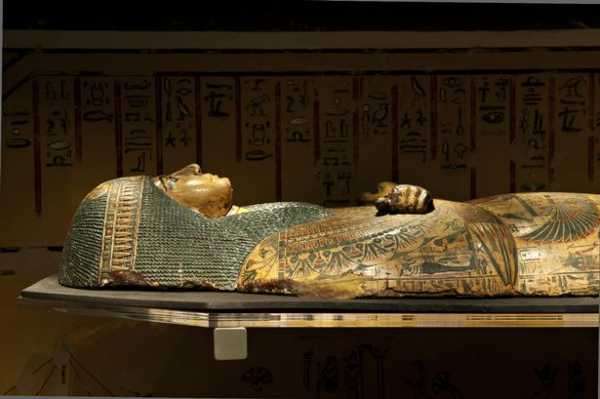 Writing in Scientific Reports, the researchers say the potential benefits outweighed the concerns – particularly because Nesyamun's own words express his desire to "speak again" and the techniques used were safe.

Prof Howard said: "The CT images confirmed a significant part of the structure of Nesyamun’s larynx and throat remains in place as a result of the elaborate mummification process, thus enabling the vocal tract shape to be measured. The tongue, however, has lost its muscular bulk over time and the soft palate is not present."

Nesyamun's tract appears notably smaller than those of contemporary adult males, he said.

The recreation of a vocal tract preserved over three millennia has implications for the way in which the past is presented to the public in the present.

It may provide an opportunity to hear the vocal tract output of an individual that lived in ancient times.

The reign of King Ramses XI was marked by civil wars involving the high priest of Amon and the viceroy of Nubia – a region along the Nile where Nesyamun came from.

Prof Howard said: "As a rare witness to a cataclysmic period in Egypt’s ancient history, Nesyamun also has a pre-eminent place in the history of Egyptology.

"Having considered and accommodated all ethical implications, the transmission of sound resulting from his actual vocal tract after a three millennia silence would mean that those who come to see him would also be able to hear a sound from his vocal tract as an initial step, emphasising his humanity with the potential to excite and inspire.

"Similarly, the well-preserved temple of Karnak in which Nesyamun undertook his duties is the destination for over a million visitors each year, providing further exciting possibilities for heritage interpretation within Egypt's tourist economy.

"This innovative interdisciplinary collaboration has produced the unique opportunity to hear the vocal tract output of someone long dead by virtue of their soft tissue preservation and new developments in technology, digital scanning and 3-D printing."