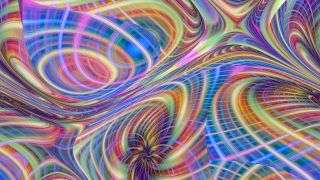 Scientists just created a pattern that, according to researchers, is impossible to duplicate or forge, a feat that could quash counterfeiters.

The key to these patterns lies in a two-step verification system that incorporates both micropatterns and the same principles used in whispering galleries, according to the researchers, from the University of Tsukuba in Japan.

In a traditional whispering gallery, two large, concave dishes are placed at opposite ends of a long hallway. A whisper into one of these plastic dishes can be heard clearly by someone standing in the other one down the hall. Entire rooms can also be whispering galleries, such as St. Paul’s Cathedral in London. There is also an unintended whispering gallery in the lower concourse of Grand Central Station in New York City. All of these spaces have a few things in common. They are all rounded and their surfaces project sound to unexpected places. For the new impossible-to-duplicate patterns, the researchers used light waves reflected inside of a microscopic chamber, instead of sound waves in a gigantic room.

The anti-counterfeit micropatterns created by the Tsukuba researchers are designed to be used for authentication purposes. Security measures such as these often embed physical functions into the product during the manufacturing process. In this case, researchers were able to embed a phenomenon produced by light waves into a microscopic image.

To create the patterned microscopic image, described May 6 in the journal Materials Horizons, the researchers embedded a light-wave fingerprint under a teensy, 1-millimeter-wide drawing of Mona Lisa, which is about one-tenth the size of a key on your keyboard. That tiny image contains millions of evenly spaced pixels per square centimeter.

Within each of the millions of pixels is what the researchers are calling a whispering gallery mode (WGM) fingerprint, a unique color signature created in a microscopic, rounded cavity with reflective surfaces. Each of these reflective cavities has a unique shape. Shapes can vary from elliptical, spherical, oblate-spherical, to hemispherical, but they are always rounded and always have a reflective surface that will facilitate the whisper chamber effect.

Like human fingerprints, no two of these cavities are identical. Into each uniquely-shaped cavity, the Tsukuba researchers placed a microscopic droplet of fluorescent dye that is chemically sensitive to light. Once the dye was in place, the researchers shined visible and ultraviolet (UV) light onto the dye, in a random, unpredictable manner. The light waves reflected inside each cavity, similar to the way sound reflects in a whisper gallery, which caused the dye molecules to react. The variety of cavity shapes combined with the exposure of unique patterns of light applied to the fluorescent dye, result in a unique color signature within each pixel.

«This creates a complex color pattern that cannot be counterfeited,» senior study author Yohei Yamamoto said in a statement from the university.

The final step taken by the researchers was to cover the entire array of millions of WGM fingerprints with another material. This is the material they used to paint the tiny, visible image of Mona Lisa.

In the future, such patterns containing WGM fingerprints might be used to draw your picture on your credit cards and drivers’ license. Governments and businesses could utilize patterns, created through this process, to combat counterfeiting of almost anything that is currently susceptible to these crimes. They can be used to ensure privacy and prevent countless types of fraud, the researchers said. Someday, this technology may be used to authenticate priceless artworks, like the actual Mona Lisa on display at the Louvre Museum in Paris. Its uses are only limited by the boundaries of human imagination.