Home Science and Technology This satellite can spy on people even through walls. It can be... 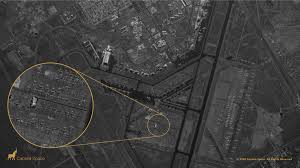 In films about cool detectives, special services often use technologies that allow you to watch people through space satellites. If in the story the criminal takes people hostage, the armed forces can see his exact location inside the premises and quickly neutralize. Recently, such technology exists in reality and can be used by both public and private clients. You just need to pay some money to Capella Space and it will provide satellite images from any part of the world. And the most interesting thing about the technology she developed is that satellites are able to see even through the walls of some buildings. In the title image, you can see which aircraft is in a closed hangar. But how does this technology work and do it have any restrictions?
Satellite Surveillance
Capella Space spoke about the developed technology on its official website. At the moment, the Capella 2 satellite is in orbit on our planet, which allows you to receive spy images. Ordinary satellites have ordinary cameras, shots of which we see in the Google Maps service and its analogues. But the Capella 2 satellite is equipped with a synthesized aperture radar (PCA). It sounds like something very complicated, but the principle of its work can be explained in simple language.
The Capella 2 satellite works about the same way. Towards the object of interest, it sends a radio signal at a frequency of 9.65 GHz and creates an image based on the reflected data. According to Capella Space, the satellite can even see through the walls of some buildings, especially through skyscrapers. If you look at uncompressed, original satellite photos, you can even see what is happening in certain rooms. So, at least, the CEO of the company Payam Banazadeh speaks.