Home Science and Technology World’s biggest iceberg that’s 4 times the size of London is about... The iceberg, called A68, has a huge area of around 6,000 square kilometres (2,300 square miles), meaning it’s roughly four times the size of London

The world’s biggest iceberg is abut to enter the open ocean for the first time.

The iceberg, called A68, has a huge area of around 6,000 square kilometres (2,300 square miles), meaning it’s roughly four times the size of London.

It first broke free from the Antarctic in 2017, and has spent the last three years pushing north.

Now, A68 is about to reach the Southern Ocean, where experts believe it could finally break up.

Speaking to BBC News, Professor Adrian Luckman, an iceberg expert from Swansea University, explained: “With a thickness to length ratio akin to five sheets of A4, I am astonished that the ocean waves haven't already made ice cubes out of A68. A68 barely moved after calving, but this year has suddenly raced northwards
(Image: NASA/AQUA/MODIS/A.Luckman)

"If it survives for long as one piece when it moves beyond the edge of the sea-ice, I will be very surprised.”

The iceberg has slowly been pushed northwards by prevailing winds and currents, and is currently  at 63 degrees South latitude.

While icebergs calve from Antarctica all the time, this one is particularly large, meaning it could pose a hazard for maritime traffic.

The huge iceberg will float in water, and thankfully will not add to sea levels when it melts. 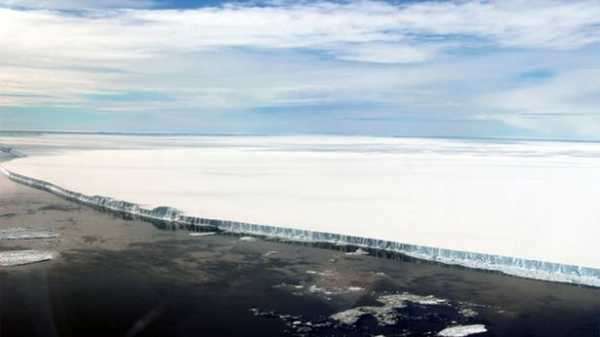 Scientists are now monitoring A68 closely, but are also keeping an eye on two other soon-to-birth icebergs.

The first imminent iceberg is expected to come off the Pine Island Glacier, and is predicted to be just over 300 square kilometres when it finally calves.

Meanwhile, the second imminent iceberg is on the edge of the Brunt Ice Shelf, and is predicted to be about 1,500 square kilometres.

Tribulation: Is now the Great Tribulation Jesus Christ and the Bible...