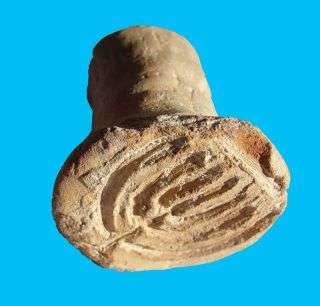 The seven-branched menorah was engraved on what researchers say was likely a bread stamp used by Jewish bakers to identify their kosher breads by name some 1,500 years ago.

A tiny stamp bearing an image of the Temple Menorah and likely placed on baked goods some 1,500 years ago has turned up during excavations near the Israeli city of Akko, researchers announced.

The Israel Antiquities Authority discovered the ceramic stamp while excavating at Horbat Uza, a small rural settlement east of the city Akko, before construction of a railroad track connecting Akko and Karmiel in northern Israel.

From the Byzantine period, the stamp is called a “bread stamp,” as it was used to identify baked goods; this one, in particular, probably belonged to a bakery supplying kosher bread to the Jews of Akko, the researchers say.

Engraved into the stamp is the seven-branched menorah on top of a narrow base. Several Greek letters appear around a circle and dot, all of which are engraved on the end of the menorah’s handle. The researchers suggest the letters spell out the name Launtius, a common name among Jews of this period and a name that has shown up on other bread stamps. Launtius was likely the name of the baker, they added. [Photos of stamp & excavation]

“A potter engraved the menorah image in the surface of the stamp prior to firing it in a kiln, whereas the owner’s name was engraved in the stamp’s handle after firing,” said David Amit of the Israel Antiquities Authority who studies bread stamps. “Hence we can assume that a series of stamps bearing the menorah symbol were produced for Jewish bakers, and each of these bakers carved his name on the handle, which also served as a stamp.”

The stamp would have been used to label the dough with the baker’s name.

The image of the seven-branched Temple Menorah supports the idea that it belonged to the Jews, as Christian bread stamps tend to have a cross pattern on them — the Christian type was more common during the Byzantine, according to Gilad Jaffe, one of the excavation directors for the Israel Antiquities Authority.

“The stamp is important because it proves that a Jewish community existed in the settlement of Uza in the Christian-Byzantine period,” Danny Syon, also an Israel Antiquities excavation director, said in a statement. “The presence of a Jewish settlement so close to Akko, a region that was definitely Christian at this time, constitutes an innovation in archaeological research.”