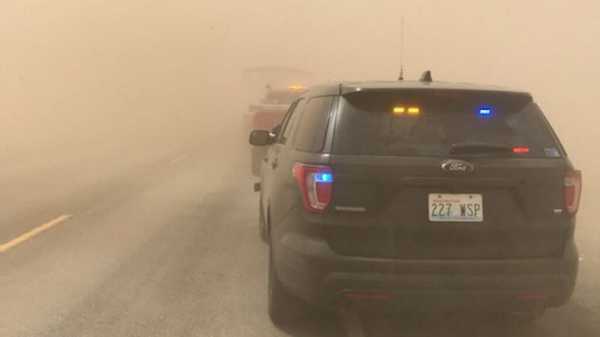 Strong winds whipped up a wall of dust in eastern Washington on Monday near a town with a name appropriate for the conditions, causing a car crash in the poor visibility.

The National Weather Service (NWS) office in Spokane said a dust advisory was issued Monday afternoon due to blowing dust near the town of Dusty, about 75 miles southwest of the city.

"We have had reports of blowing dust near Dusty (seriously, near the town of Dusty) on SR 26 and SR 127," the NWS tweeted. "There has already been a collision in the area."

The Washington State Patrol said that State Route 26 was "fully blocked" about 3 miles outside of Dusty in Whitman County after a semi-truck and a car crashed. 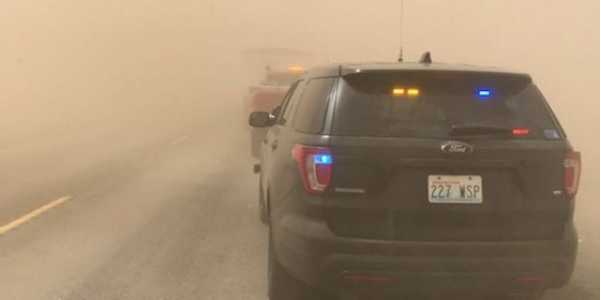 A major dust storm was reported Monday outside of Dusty, Wash., leading to the closure of a roadway for several hours and one crash reported.
(Washington State Trooper Jeff Sevigney/Twitter)

Sevigney said no serious injuries were reported in the crash. The highway was closed for nearly six hours due to the dust storm.

"Dare we say it? It was a bit dusty just outside the town of Dusty today," the agency tweeted.

Forecasters from the NWS said strong winds in the region caused areas of blowing dust with gusts up to 40 mph reported.

According to the NWS, dust storms and haboobs can occur anywhere in the U.S. but are most common in the Southwest. Haboobs occur as a result of thunderstorm outflow winds.

Dust storms present the biggest threat to motorists, as the advancing wall of dust and debris may be miles long and several thousand feet high. 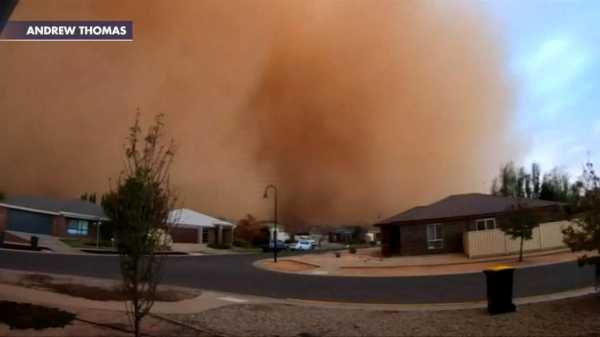 Dust storm rolls in over Australian town plunging it into darkness

"Blinding, choking dust can quickly reduce visibility, causing accidents that may involve chain collisions, creating massive pileups," according to the NWS. "Dust storms usually last only a few minutes, but the actions a motorist takes during the storm may be the most important of his or her life."