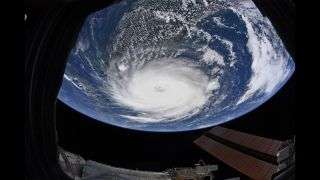 Hurricanes are getting stronger as the world gets warmer, according to a new analysis.

Studying how hurricanes have changed over time is difficult. The tools scientists use to study them change constantly and. measurements made with one instrument can’t be compared easily to measurements made with another. So though research has  suggested the warming world would produce wilder and stronger hurricanes, it’s been difficult to say that with certainty. Until now, the data just hasn’t been complete enough.. A new paper, published online May 18 in the journal Proceedings of the National Academy of Sciences, aims to change that — studying a period of 39 years, between 1979 and 2017. Looking at the full four-decade span and normalizing their data in a certain way, the researchers found a clear trend: Storms are getting stronger in general, and major tropical cyclones are coming more often.

The 39-year period the researchers studied covers an era when climate change dramatically accelerated, according to the National Oceanic and Atmospheric Administration (NOAA) reports. The world has warmed significantly in every year of those 39, and the 39 years include eight of the 10 warmest ever recorded ( 2018 and 2019 also make the warmest-years list but were too recent for this study, and the 2020 season isn’t over yet).

“The main hurdle we have for finding trends is that the data are collected using the best technology at the time,” James Kossin, a NOAA scientist and University of Wisconsin-Madison professor, said in a statement. “Every year the data are a bit different than last year, each new satellite has new tools and captures data in different ways, so in the end we have a patchwork quilt of all the satellite data that have been woven together.”

In order to create a consistent record to work with, the researchers sanded the edges off their newer, sharper tropical cyclone images to fit an older standard: Images where each pixel represents an area  5 miles by 5 miles (8 by 8 kilometers), taken every three hours. They also tossed out images from newer satellites that provide views of storms from angles not available in 1998. That left them with an extensive dataset of about 225,000 similar-quality images of about 4,000 global tropical cyclones stretching back to the disco era.

Meteorologists have long used images of tropical cyclones to estimate their wind intensities, measured in kilotons. And that’s what the researchers did here, finding that the chances of any given tropical cyclone becoming a hurricane (hitting 65 knots) have gone up. Normally, hurricanes are defined as storms with winds of at least 74 mph (119 km/h). Winds of that speed emerge around the 65-knot mark. And the odds of major hurricanes (100-knot storms) have gone up by about 15% — with most of that increase happening in the last 19 years of the 39-year study period.

Right now, other possibilities haven’t been completely ruled out. This paper on its own doesn’t rule out the idea that the uptick in hurricanes isn’t the result of some perfect coincidence of other trends, the researchers wrote. But it shows the uptick is happening, precisely during the period of greatest warming, and precisely as the models of how that warming would impact tropical cyclones predicted. The balance of evidence — models and real-world observations — points strongly toward the idea that tropical cyclones “have become substantially stronger, and that there is a likely human fingerprint on this increase,” the researchers wrote in the study.

The trend isn’t obvious, the researchers wrote. There are regions like the North Pacific, where cyclones haven’t gotten stronger — likely because climate change has also moved their average storm tracks northward, to cooler regions with less ocean energy to feed them. And the worldwide average trend toward more powerful storms is complicated by other factors — cycles in the Atlantic Ocean that would have tended to make these storms more intense in recent decades anyway. This paper doesn’t fully disentangle local trends like those from global warming effects, the researchers wrote. But it does establish with 95% confidence that tropical cyclones have gotten significantly stronger in the era of most intense climate change, leading to more tropical cyclones becoming hurricanes, and more hurricanes becoming “major hurricanes.”

UFOs: Were aliens spotted on the Moon in NASA’s Apollo 9...