Home Strange news Did men’s beards evolve to absorb a punch to the jaw? 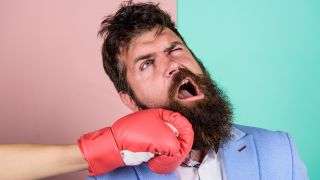 In a brawl, a beard may soften a blow.

Full, luxurious beards are a sight to behold, and they may also serve a practical purpose — softening the impact of a punch to the jaw.

Throughout history, flowing beards have been celebrated by cultures around the world as an emblem of social dominance and virility, much like the flowing mane of a dominant male lion.

However, the thick hair of a lion’s mane also protects a big cat’s throat against a rival’s lethal claws and teeth, scientists have said. And a dense beard may lend similar protection against deadly attacks by cushioning and absorbing forces directed at the jaw, the facial bone that breaks the most often during combat, researchers recently suggested.

Charles Darwin, celebrated naturalist and father of evolutionary theory (who was also the owner of a magnificent beard) had something to say about facial hair. Though Darwin saw the lion’s mane as a source of physical protection, he viewed the human beard as merely an “ornament” for attracting female attention, scientists reported in a new study, published online April 15 in the journal Integrative Organismal Biology.

The study authors proposed otherwise. They argued that hairs in a beard would collectively diffuse the force of a blow and so may have evolved in response to the need to win male-male battles. A growing body of evidence hints that human skeletons and muscles evolved to support specializations linked to male fighting; other researchers have previously suggested that male facial shapes evolved to protect the face from damage during combat, according to the new study. It could therefore be possible that beards evolved for the same reason, the authors said.

To test that idea, the scientists built models that approximated the structure of bone in a human skull. They cut the bony material into bricks and wrapped them in sheepskin fleece, “because it was not practical to obtain fully bearded skin samples from human cadavers,” the researchers wrote. While sheep’s fleece wasn’t a perfect analogue for beard hair, “the volume of follicles in our fleece samples did approximate the volume of full beards, which is unlikely to be true for the pelts of most other species,” they said.

Three types of sheepskin coverings were used for the experiments. Furred samples, where the sheep’s wool was left at its full length, tested the effectiveness of a full beard at cushioning an impact. Sheared samples told the scientists if the roots of hair follicles provided any protection, while plucked samples represented a beardless jaw.

The researchers then conducted drop-weight tests, placing the sheepskin-wrapped “bone” bundles on an anvil and releasing a blunt rod from overhead.

The “furred” bundles fared best against the heavy weight, absorbing nearly 30% more energy than the bundles that were sheared or plucked. Under a  machine setting for an impact that damaged all of the plucked samples and 95% of the sheared samples, only 45% of the furred samples cracked or shattered. Furred samples also took longer after an impact to reach their breaking point than did the other samples.

“The results of this study indicate that hair is indeed capable of significantly reducing the force of impact from a blunt strike and absorbing energy, thereby reducing the incidence of failure,” the scientists said.

“If the same is true for human facial hair, then having a full beard may help protect vulnerable regions of the facial skeleton from damaging strikes, such as the jaw. Presumably, full beards also reduce injury, laceration and contusion, to the skin and muscle of the face.”

How exactly does that work? Individual hair fibers likely absorbed energy from the punch and distributed incoming force over a larger area, the researchers said. However, more experiments would be required to precisely explain the mechanisms through which this protection happens. Human facial hair can also vary widely in coarseness, thickness, curl and density; and different beards may vary in their effectiveness at warding off damage from impacts, according to the study.

Why Do People Have Different Personalities?