Home Strange news Would You Eat a Tarantula-Topped Burger? 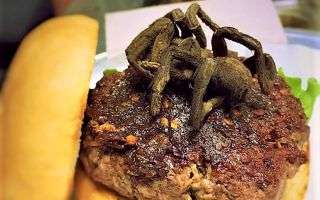 A tarantula — “lightly salted and oven-baked” — tops a burger at a Durham, North Carolina restaurant, testing “the most daring of taste buds.”

Top this: A burger restaurant in Durham, North Carolina, is offering a peculiar addition to its selection of toppings this month — alongside the usual array of cheeses, vegetables, sauces and other condiments, one special burger is presented topped by a tarantula.

The Tarantula Burger, prepared and served exclusively at Bull City Burger and Brewery during April, features a beef burger from local, pasture-raised cows, spicy chili sauce, gruyere cheese, and an oven-roasted tarantula (it is not specified whether the spider was pasture-raised), according to a description on the restaurant’s website.

To participate in the so-called “2018 Tarantula Challenge,” curious diners can sign up at Bull City Burger for a raffle ticket, which puts them in the running to win the signature sandwich. One winner is drawn daily and their ticket number is shared on social media; they then have 48 hours to contact the restaurant and schedule a time to devour their tarantula-topped prize. [Rattlesnake Sliders & Goat Penis: Photos of Exotic Food]

The Tarantula Challenge is part of the restaurant’s annual “Exotic Meat Month” celebration; taking place every April, it offers customers a chance “to experience tastes that other cultures enjoy every day,” according to the Bull City Burger website. All month, customers can sample options that may include wild boar, alligator, caribou or ostrich, to name just a few.

For example, on April 9, the restaurant served up a piping hot camel burger, garnished with queso fresco and citrus cactus salad, while python curry was the daily special on April 10, and a rabbit meatball sub debuted on April 13. The Exotic Meat Month menu even offers a dessert option — homemade ice-cream studded with chocolate-covered insects.

But while most of Bull City Burger’s special menu items are available to all restaurant-goers — on a first-come, first-served basis — the Tarantula Burger is only awarded to lucky lottery winners.

And what, you may wonder, does tarantula taste like?

“People say it tastes most like crab, or other shellfish, sometimes with a bit of a metallic-y taste,” restaurant representatives wrote in a tweet. However, they hinted that there were subtle differences in the tastes delivered by the arachnid’s different body parts, adding that ultimately, the only way to really know is to bite the bullet — or in this case, the spider — and “try it for yourself!” they wrote.

Served with “Dirty Fries,” the Tarantula Burger costs $30, according to the restaurant’s website. The Tarantula Challenge Raffle will continue through the end of April, as long as there are participants willing to sign up for a chance to win the leggy burger — or until supplies run out, restaurant officials announced on Twitter.

The True Story Of The Man In The Iron Mask

This month on the forums: Celebration Days, AMAs and Giveaways!